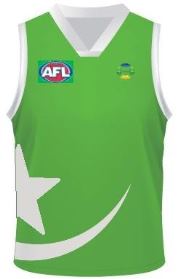 2017 will see Pakistan competing as the Shaheens (though it was earlier suggested the Dragoons would be the name), a team selected from across Pakistan in the AFL Pakistan. The Pakistan women's team will definitely be developmental as it has been in operation for less than one year.

The team is made up of athletes that have variously competed in numerous sports before coming to the Australian game. While the team has been working towards the International Cup, confirmation of their attendance and obtaining visas came very close to tournament kickoff.

History of Football in Pakistan

Australian football has been played in Pakistan since 2006, starting with the creation of the Australian Rules Football Federation of Pakistan, based in the city of Mingora, Swat Valley. Mingora is probably one of the most unlikely of places to establish Australian Football with the Swat valley being in the Northern extension of Pakistan at the base of of Himilayan mountains sandwitched between Kashmir and Afganistan. Mumtaz Ali Khan was instrumental in setting up the initial competition through the Tanzeem-E-Insidad-E-Manshyiate organisation (TIM) and Mumtaz became the organisation's first President. TIM is a group combating drug use through seminars, medical centres and sporting tournaments.

May 2006, the city of Mingora, hosted a tournament held by the Tanzeem-e-Insidad-e-Manashyiate organisation between 4 school and college-based teams. Mumtaz Ali Khan TIM said that his organisation, TIM, has been using sport as a tool against drugs in society since 2001-02. The connection to Australian Rules stems from his having once seen the game on television via a sports channel, becoming interested and deciding to begin the game in the Swat area - beginning with school and college level students.

This group approached Aussie Rules International for balls and other materials. Four sides representing the Tanzeem-e-Insidad-e-Manashyiate (the Swords), the Swat Public School (the Eagles), the Jehan-Zeb College (the Dolphins) and the Government High School No3 (the Bulls) competed.

June 2006, the Swat Continental Hotel in Mingora, hosted the 'Seminar for the development of Australian Rules football in Pakistan' run by Mumtaz Ali Khan, and attended by the federation's executive members, school and college-level students and numerous volunteers had an underlying theme of 'helping youths resist drugs'. During the seminar, Mumtaz Ali Khan expressed his thrill that Pakistan had joined the growing list of football-playing nations.

They had a four-team High School/College competition, regular fixtures and around 100 players on their lists. In another positive, Naeem Ullah Khan, General Secretary for the Federation, announced that football would be used to preach peace in the area, with plans to spread the game to nearby Afghanistan, Kashmir and Central Asia. It is also hoped the sport would foster Australia-Pakistan relations. Mumtaz Ali Khan thanked the many people who have been involved with the game to date, but stressed that they still faced an uphill battle and that greater assistance was needed in maintaining and growing the sport.

November 2006, Mumtaz Ali Khan opted to vacate the role of President and take on a more active role as Programme Development Officer, in the hope of further encouraging the sport's growth throughout Pakistan. Habib ul Haq, Vice President at the time, took up the role of President. Two more clubs had been established, one in Peshawar (the Colours) and one at the University of Malakand have joined the four team round-robin competition in Mingora, where four clubs attended. Plans were made for mirror competitions elsewhere in Pakistan and in Afghanistan and Kashmir.

That made for 6 football teams in Pakistan at the time, all located in the North-West Frontier Province. Five of those are based around educational institutions.

In 2007, the ARFFP changed their name to AFL Pakistan. It was hoped that this new name and image would make them a more attractive organisation to potential sponsors.

November 2014, Tayyab Chattha and others effectively rebooted AFL Pakistan with help of the Australian High Commission Islamabad staff.
A number or tournaments were held in 2015 cuminating in the first National Championships. The 1st National Australian Football Championship of Pakistan where held on 27th~28th October 2016 played at the  Jinnah Stadium ,Pakistan Sports Complex Islamabad.

Ten teams from all over Pakistan participated. The final match was played between the Islamabad Tigers and the Rawalpindi Lions. In attendance was the Australian High Commissioner to Pakistan as chief guest and well as the Ambassador of Tajikistan, the Ambassador of Portugal and diplomats from Russia, Brazil, Oman and other dignitaries. Kashif Bouns presented the cup for AFL Australia and also did commentary on the match. The final Match was live telecast on Pakistan National Sports TV around the world.

The Islamabad Tigers starred on their first outing showing fabulous clean ball skills, gut running and determination to overcome the Rawalpindi Lions in a close final by 34 to 30 points.

There were 15 club football in Pakistan at the time, all located in different cities, 4 clubs in Islamabad, 4 clubs in Rawalpindi 2 clubs in Gujranwala, and also including 4 girls club.

Pakistan, in the eyes of Westerners. is one of the lesser known countries. Few people appreciate the rich history of Pakistan which has been ruled by numerous empires and dynasties, including the Persian Achaemenid Empire, Alexander of Macedonia, the Indian Mauryan Empire, the Arab Umayyad Caliphate, the Delhi Sultanate, the Mongol Empire, the Mughal Empire, the Durrani Empire, the Sikh Empire, and most recently, the British Empire. Most people are unaware of the bloody split from India in 1947 that resulted in millions of deaths in the creation of East and West Pakistan. West Pakistan became Pakistan in 1971 with the Independence of East Pakistan to become the country of Bangladesh.

Geographically Pakistan consists of the Indus River basin that collects water from the Himilayan mountains and transports it to the rich Indus delta before entering the Arabian Sea. The name "Indus" gives rise to the name "India" and the Punjab is a large part of Pakistan.


Pakistan both men's and women's player profiles can be seen here. http://aflpakistan.com/index.php/category/players/

Michael Gallus from Footy's 4 All was this week named as the coach of the team (pictured below).

The women's team has been competing for less than a year and is drawn from a pool of 70~100 women. They will struggle as most of the women's teams are well established and proficient. Even the less developed teams will have an advantage over the Pakistan team.  We do not expect them to win a match in the first three rounds, but we do expect them to learn quickly and use this tour to benchmark where they need to get to in the years to come. 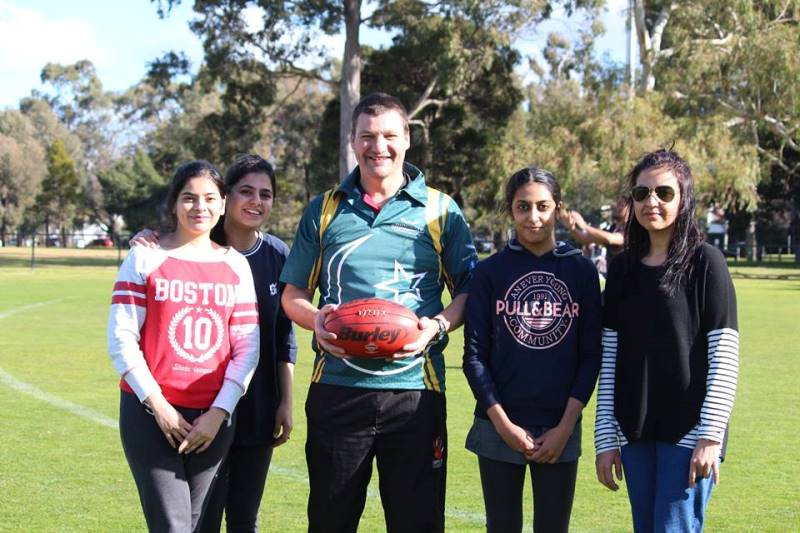