Media Release from AFL ASIA - Wed October 19, 2016
The Philippine Eagles have defeated the Singapore Wombats to win their first ever Asian Championships in spectacular fashion, with a come from behind win in torrential rain at RMIT Vietnam's Saigon South Campus.
A record 520 registered players, including an ever-improving 70 local players representing 13 clubs from across Asia arrived in Ho Chi Minh City, Vietnam for the biggest two-days of footy Asia has ever seen. The event growing to a second day for the first time in the 17-year history of Asian Champs, with the Indonesia Garudas winning the inaugural All-Asia Cup on the Friday.

The Bali Geckos would also depart Vietnam with their first ever piece of AFL Asia silverware, defeating the Myanmar Fighting Cocks in the final of the 12-team, second division competition.

Eagles fly in the wet
Footy in the Philippines has never looked better after the Eagles' thrilling 3-2-20 to 2-3-15 defeat of the Singapore Wombats in the 6-team Division One competition, capping off a huge 2016 for the Eagles after their Manila Cup success earlier in the year.

The heavens opened up right on cue as both the Division 1 and 2 Grand Finals began, with Singapore taking the early ascendancy in the wet. However, just as they did in the semi final against Hong Kong where they overcame a 3-goal lead to make their way into the Grand Final, it would be the belief and never say die attitude of the Philippines boys who would prevail applying massive pressure on the Singapore defense in the final throws of the game.

Down 2 points with 3-minutes to go, Singapore held on for dear life with a snap from the Philippines being only just touched on the goal line, putting the Eagles just one point down. The Singapore kick out couldn't pass half-way before the ball was pumped back into the Philippines forward line where Eagle Chris Wiese would somehow hold onto a huge chest mark, with a subsequent late challenge from Singapore's Grant Bell costing the Wombats a massive 25-meter penalty and gifting Wiese with an easy kick on the goal line that would see them home.

Inspirational Eagles Captain Evan Spargo was full of praise for his club after the game on the AFL Asia Livestream in saying "Just the belief that we have built, the people from the top to the bottom, everyone has been involved and its a credit to all that we have got this result. Our number one thing is that it was going to be a slog, it was going to be a wet day, lets just get the ball forward and we will be hard at the footy at that time and that's what got us through". 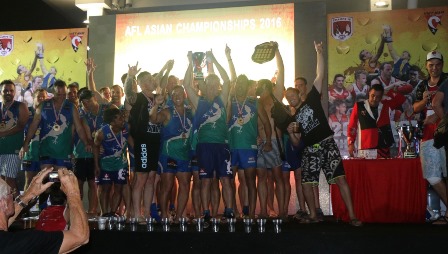 There's always a bit of excitement when the wind picks up in Bali, and the boys in the Quicksilver boardshorts proved their worth as the weather hit, defeating a valiant Myanmar Fighting Cocks team 5-5-35 to 1-4-10.

Loosing their fearless leader Henry Cox in a sickening head clash with a Lao Elephant earlier in the day, the Fighting Cocks battled hard right until the end, but it was the superior fitness of the Geckos in the wet which would see them lift AFL Asia's second division title and the Gecko's first piece of silverware in their long history of competing at Champs.

There was no mistaking long-time Bali President Hinchy's delight after the win on the AFL Asia livestream, "It feels like the MCG on the last day of September mate...15 years of having a crack for the Geckos and the Jakarta Bintangs to finally win this one."

"We had the advantage, we live near the Ocean...we wear boardies, the wet weather was always going to suit us. We’re good in the water and we brought it home" said Hinchy.

Women impressive
In a first for AFL Asian Champs, a Reds v Whites women's exhibition game was held before the finals, with an impressive display from 29 girls from across Asia. The majority of the girls came from the Vietnam Swans' sister club the Saigon Ladies Gaels, with several Viet Celts from Hanoi and Cambodian ladies also making the trip to Saigon for the game. The Red's would defeat the Whites 19-7 in an entertaining contest with Hannah from Cambodia collecting the Best on Ground award.

Driver behind the new initiative, Vietnam Swans Committee member Mairead Scanlon was hopeful this would become a feature of Asian Champs in the future in her post-game interview on the AFL Asia livestream with Asian legends Phil Johns and Mick Francis. "We just encourage all the AFL Clubs around the region to get their girls involved, link up with the Gaelic football clubs...and just get the girls kicking the footy and making it a regular thing at AFL Asia tournaments".

While Western Bulldogs Premiership player Tom Liberatore's short cameo for an undermanned Macau Lightning continues to grab all the headlines back home in Australia, AFL Asia and its clubs are reveling in a massive two-days for footy in Asia which many hope will set the course for future expansion of the game in Asia.

Attending his second Champs to further assist the development of Asia's local and female players was ex West Coast Eagle Andrew Embley, who along with ex-Sydney Swan and current Sydney Board member Brad Seymour, coached the inaugural All Asia Cup and Women's game and conducted Auskick clinics on the sidelines.

Friday's All-Asia Cup is being hailed a huge success, with 61 local players representing Indonesia, China and a combined IndoChina team showing just how far Asian footy has come in a short period of time. The Indonesia Garudas claiming the inaugural Cup after a dominant display over both the Port Adelaide-supported China Reds and the Embley-coached combined IndoChina team who featured players from Cambodia, Lao, Myanmar and Vietnam.

Liberatore and fellow Bulldog Luke Dahlhaus' unannounced attendance at Champs was much welcomed by the Asian footy community, with both happily obliging the many players and supporters who had traveled to Vietnam with photos and autographs throughout the day.

Libba then suprised all by pulling on the boots for a short time for an undermanned Macau Lightning team in their second division game against the Japan Goannas, after AFL Asia had relaxed ring in guidelines for their squad after loosing the majority of their team only weeks out of Champs due to Leighton's unexpected withdrawal from a major job in Macau. Libba's snap from 40 out will be sure to go down in AFL Asia folklore, with the champion quickly retiring to the sidelines following a memorable demonstration of elite football.

A big thanks to all the players, supporters and sponsors who made the 2016 AFL Asian Championships such a huge success! 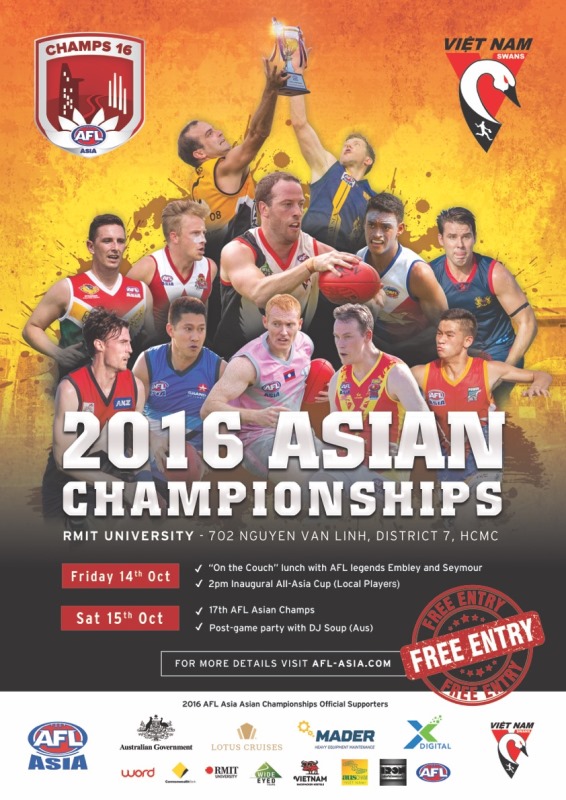