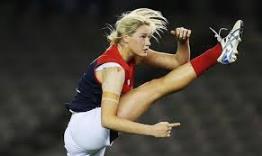 At a function today, AFL Chairman Mike Fitzpatrick announced the initial eight women’s teams to take part in the national competition for 2017. As well as the Melbourne and Western Bulldogs, both teams having had teams playing on a regular basis, Adelaide, Brisbane, Carlton, Collingwood, Fremantle and Greater Western Sydney were granted licences to compete next year.

Geelong, St Kilda, Richmond, North Melbourne and West Coast were the unlucky clubs to miss out on inaugural selection, but have received provisional licences to clear their path for entry into an expanded league for women from 2018.

The Gold Coast Suns, Port Adelaide, Essendon, Sydney and Hawthorn did not pursue a licence for next year but will consider their options for women’s teams further down the track as the new competition unfolds.

TRADITIONAL heavyweights Carlton and Collingwood join Melbourne and the Western Bulldogs as the Victorian contingent in the first year of the AFL national women's league.

Fremantle has edged out West Coast in the battle of the west to be the Perth-based team in the eight-club inaugural competition.

Adelaide, Brisbane Lions and Greater Western Sydney are the other non-Victorian clubs to compete in the eight-week season in February-March next year.

The other AFL club applicants, Richmond, Geelong, North Melbourne and St Kilda, along with the Eagles, have been granted provisional licences to be part of an expanded women's league in 2018, depending on development of the game in their areas.

Next season's women's competition will feature six home-and-away rounds, with the top four playing two semi-finals and a Grand Final.

The women's Grand Final could be played in the week between the end of the NAB Challenge and the start of the AFL season, or as a curtain-raiser to the AFL season opener at the MCG on either a Thursday or Saturday night.

"This day has been a long time coming. The number of women and girls playing football has doubled over the last five years,'' AFL commission chairman Mike Fitzpatrick said at the launch near the city-end goals of the MCG on Wednesday morning.

"Our CEO Gillon McLachlan calls it a revolution and it is. A fully fledged national competition with the best women players will grace AFL grounds, wearing AFL jumpers and representing passionate AFL tribes.

Full statement from the AFL and Mike Fitzpatrick's speech

"On behalf of the AFL Commission, I want to express our deep gratitude to those who continue to help grow and develop women's football at all levels.

"The establishment of a national women's league will provide a platform to inspire young girls to reach for the stars and provide another avenue for Australian Rules fans to enjoy. Our game will never be the same.''

Another media announcement was to follow with more details of how the women's league would work.

Melbourne captain Daisy Pearce, who will be the most prominent player in the inaugural league, said it was a banner day for women.

"We've seen on so many issues that sport is a powerful vehicle," she said.

"To see women out there playing a really physical sport, at our most powerful, will (encourage change) across all of society."