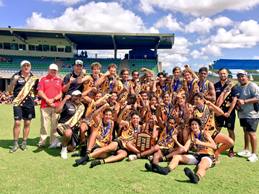 The National Diversity Championships in Townsville wrapped up today after five hotly contested days of at times scintillating football. Whilst there were many great teams, and some definite prospects for future AFL team lists, it was a domination in the end by the Western Australians.

With both their Kickstart indigenous team and their All Nations multicultural team going through the round robin stages undefeated, both went in as favourites.

Neither had to play in yesterday’s Semi Final stage after topping the ladder (first and second placed teams went straight to the Preliminary Final stage), so they were able to watch on and prepare physically and mentally for their “prelims”.

The Semi Final stage in Kickstart saw the Victoria/Tasmania team down Queensland, whilst South Australia defeated the New South Wales/ACT team in the other.

The All Nations Grand Final was a wonderful game. The team from the west kicked the first three goals of the game and looked set to run away with the cup early. But from there the Vic/Tas team just kept nagging and nipping at their opponents heals. Scores were levelled mid-way through the second half but Western Australia held on to win the title by five points.

The Kickstart final wasn’t as close, though the Western Australian team came up against a Territorian outfit that were physical and backed themselves, keeping the margin narrow enough for an upset by half time. But the structures and drilled approach of the Western Australia team saw then win the arm wrestles and pull away for their sixth Kickstart title – still the only state to have won this competition in its current format.

There will be much celebrating by the Western Australians tonight, and much wringing of hands and licking of lips from recruiters, after a tremendous elite talent program carnival that produced some extraordinary talent.

The players, coaches, umpires, organisers and other volunteers should be proud of their efforts to bring together a terrific event that lays the foundations for indigenous and multicultural youth as they pursue their dreams and develop their vast array of talents.