What Are AFL Recruiters Looking For? 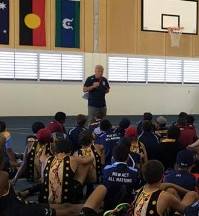 Neville Stibbard has made a long career out of talent scouting. The current Western Bulldogs recruiter also had 16 years with the North Melbourne Kangaroos during their glory era of the 1990’s as well as working to put together the initial playing lists for the Gold Coast Suns and the Greater Wester Sydney Giants in the years before they hit the field as the AFL’s 17th and 18th clubs.

His years of experience put him in the ideal position to assess talent from across the nation. He is also a guru for young talent to tap into as they develop their skills on and off the field to improve as footballers and young men in the community.

In Townsville for the current national Diversity Championships, Neville is spending his time watching the best indigenous and multicultural talent from across Australia.

Neville believes in tournaments like this. He understands that the game, and specifically the AFL clubs, need a bigger pool to monitor, especially with the trading of future draft picks. This now puts a premium on both developing talent to watch for future drafting and seeing which kids have “the right stuff” to begin and develop an AFL career. “It makes it important to watch carnivals like this. The more players in the pool give a deeper pool to choose from and a wider selection of potential players”.

Speaking to the 300 players in Townsville for the Diversity Championships, Stibbard highlighted the player’s need to “improve skill level to standard to be drafted [you have] already been identified as an elite junior talent - now go further.” He pointed out the key categories of assessment that he uses, and are used in one form or another by other recruiters nationally. Stibbard looks at football skills (especially kicking), athleticism (speed, endurance, agility), mental capacity to cope with pressures on and off field (when games don’t go as planned or feelings of self-doubt) and being a good student.

Using examples of current and past players, Stibbard drove home to message to “keep at it [their dreams] and set up to play at level of best v best.” He highlighted examples in current Western Bulldogs players, Jason Johannisen and Lin Jong who started learning the game late but kept pushing their limits to succeed. He also highlighted the Northern Territory’s Kickstart team coach Shannon Motlop who never gave up on his dream to play at the highest level. He missed draft at his age but kept at it to pursue a dream via North Adelaide in the SANFL before eventually being drafted by North Melbourne.

Ross Monaghan is a current recruiter with Port Adelaide, though his days since being with the Calder Cannons have seen him spend time at Melbourne and Richmond in football operations roles as well as recruiting. His key message was for the players to see their opportunities in life (such as this carnival) and take them. He used current Adelaide Crows player Eddie Betts as an example of a player who did things tough when younger but never stopped believing in himself. He worked day in and day out to improve his skills to make up for a perceived lack of height.

Monaghan added that recruiters monitor footy all around Australia and strongly recommended that players take any invitation to be part of a state academy, TAC Cup, WAFL, SANFL teams and carnivals such as the national Diversity Championships to learn football skills but also put their skills on display.

Stibbard used the occasion to give the assembled players an insight into a normal week for a Western Bulldogs player. “Say you tick all boxes and get drafted” he began, and then gave a brief of this week’s club preparation. His description tied into the amount of hard work expected from players who might be paid as much as $300 000 per year in the mid-range. With the Bulldogs having played last Saturday night, rehab for all players was on Sunday.

Monday from 9am saw meetings for an hour prior to morning tea, then the leadership group meet for an hour before lunch. Massages after lunch then visits to club doctor and physio. At 2pm weights upper body then 3.30pm skill work and touch work and a 4pm meeting about how day went. On Tuesday the midfielders, forwards and backs have meetings, then look at team videos before a 3.30 stoppages meeting on how to combat the opposition. A 5pm full weights session is followed by a 6pm dinner at club for all players. Wednesday is a day off where players are encouraged to look at anything from schooling to PR roles. Thursday sees goalkicking practice, a look at the opposition from videos and a full session of footy before another rehab session. Friday sees more training to touch the footy before a Saturday morning light run, light rehab and light meeting.

It is a huge commitment for players, and daunting for the youth at this carnival getting their heads around the possibility that they might be part of the small percentage of players present that might go on to an AFL career. Roughly five percent of players at these carnivals get that far, which might number 8-10 of the crop in the hall at the Weir State School adjacent to Tony Ireland Stadium.

Stibbard also noted the disappointment when players got drafted but found it was too hard, or they were too lazy and wasted their opportunity and talent. They were paid good money to play highest level but didn’t value it.

It was certainly an enlightening session for the crowded hopefuls. It added another deeper level of understanding for the players as they gave their all for their states on the field and learned how much more they need to develop off the field if they hope that a recruiter like Stibbard, Monaghan or one of many others considers them for drafting somewhere down the track.

And that is not beyond the realms of possibility.