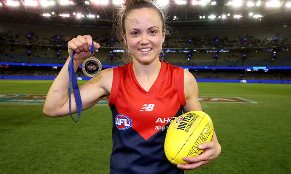 As reported by Peter Ryan at the www.afl.com.au website, the number of teams for next year’s inaugural national women’s competition is likely to now be eight, with Victorian clubs fighting hard for just four licences and the other four going to clubs in Western Australia, South Australia, New South Wales and Queensland. Clubs have already been lobbying hard and this will continue now as the reality of the 2017 season gets closer.

The AFL is considering running a national competition in February and March next year that includes four teams from Victoria and one each from Western Australia, South Australia, New South Wales and Queensland.

Such is the growth in interest in the game and apparent depth of talent the AFL is considering revising the initial concept of including six teams in the inaugural competition.

The initiative will follow on from 10 exhibition games in 2016 that will begin and end with games between Melbourne and the Western Bulldogs with teams representing Fremantle, West Coast, GWS Giants, the Sydney Swans, Northern Territory, Tasmania and South Australian All Stars teams participating.

Round one of this year's exhibition games will include players training in state academies while round two consists of state representative matches featuring the best players from around the country.

Melbourne and the Western Bulldogs are considered favourites to be given two of the four Victorian spots for the 2017 national competition, although the other eight Victorian clubs have staked a claim while competition remains fierce for spots potentially available in other states.

The competition could run for seven rounds and finals, with players drawn from around the country.

Whether the competition is aligned with the NAB Challenge played by the men and how a draft might operate remains to be determined but enthusiasm for the concept has the AFL buoyed.

Player payments would also need to be determined as the finer detail of the concept is realised.

AFL CEO Gillon McLachlan said on Friday no one would have imagined 12 months ago that AFL clubs would be competing fiercely to have a presence in a new women's competition.

While much of the detail was still to be determined and the AFL Commission needs to consider the concept, a decision on the competition's make-up is expected by May.

McLachlan said the AFL was open to the national women's game looking slightly different to the men's game, with 16-a-side and shorter games a possibility.

Commercial interest in the proposed competition is understood to be strong with last year's game in August between Melbourne and the Western Bulldogs alerting broadcasters and sponsors to the audience.

The AFL is keen for its national women's competition to be held before respective state league competitions begin so players can be involved in both competitions.

The number of women participating in AFL has increased significantly since 2010, although the base at that time was relatively small.

Original article can be found at: http://www.afl.com.au/news/2016-02-19/eight-womens-teams-set-for-national-comp