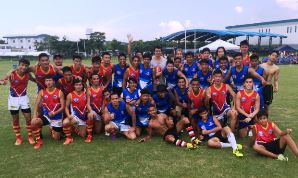 The www.afl.com.au website has recognised the recent international Australian Rules football carnivals across the world with this overview of the AFL Europe Axios Euro Cup in Croatia, the AFL Asia Asian Champs in Thailand and the USAFL Nationals Tournament in Austin, Texas.

The article by Dinny Navaratnam shows a strong endorsement by the AFL of how far the game has come on three continents - Europe, Asia and North America – by having so many clubs and national teams represented. It truly stands as example of our game beginning to take on the initial  appearance of – The World Game.

The Dragons bounced back from last year’s Grand Final defeat to the Singapore Wombats. It was the fifth consecutive Grand Final for the Dragons.

The Harrow International School in Bangkok played host to the 16th annual AFL Asian Championships, with teams in the decider each playing off in their sixth match for the day, albeit in shortened games.

Former West Coast midfielder and 2006 Norm Smith medallist Andrew Embley was heavily involved with the tournament, running a couple of clinics – one with the local players and an Auskick session as well.

Embley has familial links to Asia, with his father having been born in Burma (Myanmar) before migrating to Perth in 1964.

Plans are underway for Embley to coach an all-indigenous IndoChina team that will be competing in the 2017 AFL International Cup.

The IndoChina team is made up of players from Thailand, Laos, Vietnam, Cambodia and Burma.

In all, 404 players registered for the championships, with 40 locals.

The women’s competition threw up one of the most exciting results in years, with the Denver Lady Bulldogs eventually crowned premiers for the sixth straight time, but not before they had their 23-game winning streak ended.

With scores locked at 14-all, Minnesota’s Paige Kiecker won a free kick in the forward line as just seconds remained in the game. A 25m penalty brought her right to the goal line (25m penalties replaced 50m penalties except in the men’s division one competition).

Despite vigorous attempts from the opposition to distract Kiecker, she kicked truly to give the Freeze the historic victory.

Ultimately though, Denver was too good and came away as victors in the round robin tournament. The Lady Bulldogs beat the San Francisco Iron Maidens to seal the title, 2.6 (18) to 0.2 (2).

There were 45 teams competing at the USAFL Nationals. In all, around 70 per cent of players competing reported being born outside Australia.

On the men’s side, the Austin Crows came away as division one champions in front of their home crowd after beating Orange County, 4.4 (28) to 2.4 (16).

It's not challenging soccer just yet but Australian football is growing worldwide. Picture: Dorota Sherlock

The Euro Cup involved only locals to ensure the tournament’s fairness. England beat Denmark in the women’s competition by 48 points to be crowned champions.

The results were reversed for the men’s tournament as the Danes won by 21 points against the English.

Euro Cup was highlighted by the participation of the Peace Team, made up of Israeli and Palestinian players. The Peace Team was involved in the men’s draw and won the respect of everyone in attendance.

Yonatan Belik managed the Peace Team. The 25-year-old played for the side in the AFL International Cups in Melbourne, in 2008 and 2011.

Belik is an inspirational figures in AFL, having brought the team together to promote harmony and show that sport brings people together despite political tension and outright conflict. 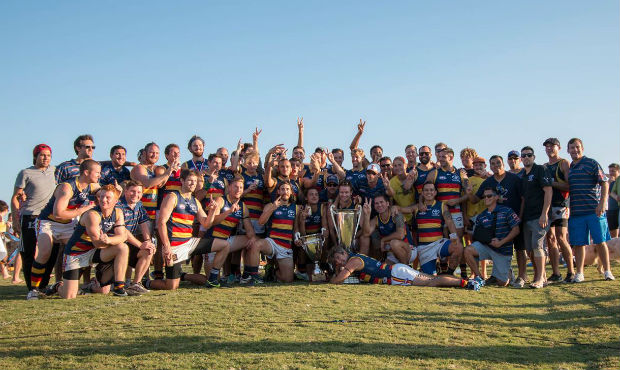