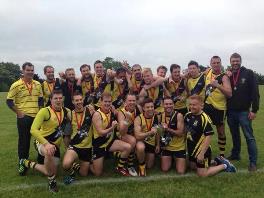 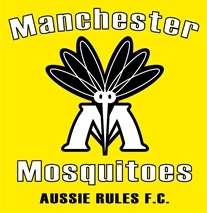 The Manchester Mosquitoes have gone back to back by taking out the 2015 AFLCNE premiership by downing Sheffield Thunder. This means that Manchester now boast four flags from five grand finals in the past 6 years, placing their run amongst the most successful of teams across Europe.

The final 47 point margin suggests a comfortable result that was all one way, but conditions saw a game which was buried effectively by quarter time and from there Sheffield spent the afternoon doing all they could to bridge the gap – which they did manage to do, just not enough to change the result.
The Mozzies blasted out of the blocks with a “premiership” opening quarter with a strong wind at their backs. Wind is always an advantage, but the best sides use it well. The Mozzies hammered home 12 goals to 1 for the quarter, effectively placing a hand on the title by the first break.

It was Sheffield’s turn with the wind in the second term and they certainly made the running, outplaying and outscoring the Mozzies but without the same explosive impact. But gaining rhythm and heart the Thunder gained back some ground, reducing a 66 point deficit to just 39 points.

The premiership quarter saw the Mozzies again kicking with the wind but as the heavens opened and the rain dulled the clean movement of the ball the scoring slowed. The result saw a five goal to nil quarter which, whilst not as damaging as the first quarter from the Mozzies, was still enough to effectively decide the result.

In the conditions the Sheffield crew were not going to outscore the Mozzies by 13 goals in the last quarter. This would be about closing the gap as they could and showing team pride. This they did but the conditions has conspired to make Thunder’s job too difficult. By the end of the match Sheffield Thunder had put much needed respectability onto the scoreboard, but the day truly belonged to the Manchester Mosquitoes. Premiers for 2015.

For the Mozzies it is time to celebrate and revel in the continuation of a great era and an imposing premiership record the envy of all other clubs. They can take some time to relax and float about in a post-premiership haze until the off-season is done and new battles commence.

Sheffield Thunder can be proud of their first grand final appearance. It may not have gone to script as they would have hoped, but their season was impressive and has paved the way for a possible era of success, starting with the next pre-season in 2016.

But for today, congratulations to the Manchester Mosquitoes on winning their fourth premiership in six years and making 2015 theirs.