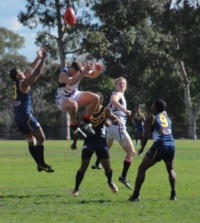 Nauru is a football mad country and they always produce a quality football side from the small island.  It’s a good measure any competing country can use to gauge their own progress.  But in 2014 didn't have the benefit of many of their players getting a grounding in Australia, and the United States Revolution have looked very good this tournament, unlucky with the draw to not be playing for top spot of Division 1.  It didn't quite go according to script though.

The much taller USA were immediately into attack for a minor score. They looked very good, kicking long to good leads and had most of the play.

Against the flow #8 Batsiua Mallinson flew high to cut off a pass with one hand and pull the ball in for a mark , only to run around the mark and drill a goal from 40m.

Two defensive lapses by the Chiefs allowed #Bryan Dragus and #2 Ryan Mc Gettigan to mark and goal. The Chiefs were great in attack like the great pack leap mark of #16 Grundler German to goal but they weren’t so quick to man up in defense allowing the Revolution to move the ball in long passes.  They are a very unpredictable side who have the confidence to take on a tackle and turn into a pack when a handpass seem more likely and they were always prepared to switch very wide if the Revolution hadn’t manned up.

In the second quarter the Revolution appreciated the opportunity to play some open football and they looked very attractive at times when in attack and defended well as well. The ball was racing from one end to the other – a shootout without much scoring but it was the Chiefs who managed to kick two goals. The Revolution coach had emphasized the need to stop the play-on game of the Chiefs for the third quarter and play constructive football themselves.. #9 Jay Levesque took a contested mark 25m out and failed to convert, followed by a missed opportunity at the other end.

The tempo had lifted as the Revolution try to bridge the gap and there pressure lead to some sloppy play by the chiefs  mainly their kicking to uncontested opposition players. It looked like it was only a matter of  time before the game changed ,but the Chiefs tightened up. They never gave up. Even when the ball was a palm’s width from the boundary they were still trying to manufacture an attacking play. Maybe they were  afraid of the Revolution ruck but it didn’t seem that way as the smaller Nauruan players continually leapt skywards to match they much taller opponents

#25 Jason Wililhelm pushes the Revos forward  and influences the game around the ground but they fail to capitalise . # 4 Fiolape Hess Tekai snapped a goal for the Chiefs against the flow from just one inside 50m. Entry. #16 Grundler gerrman marked to pass beautifully to #17 Agege Lennox for a goal.   #8 Batsiua Mallinson  kicks his second goal and when #18 Uera Greigor accepts a short pass to goal, this late flurry by the Chiefs sees them with a handy lead going into the final quarter of the final game.

Like the third quarter the Revos were immediately into attack for four consecutive minor scores. Costly misses deemed not a goal  by the width of the woodwork or a fingertip. It was a frenetic last quarter and the Revos were in touch but running out of time. When #10 Dagiaro Pilo took a contested mark and goaled from 40m. the result was sealed for a hard fought win by the Chiefs. 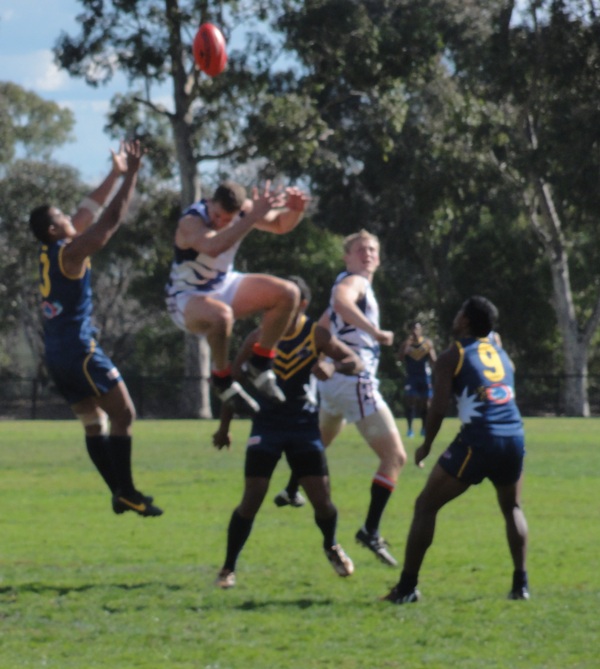 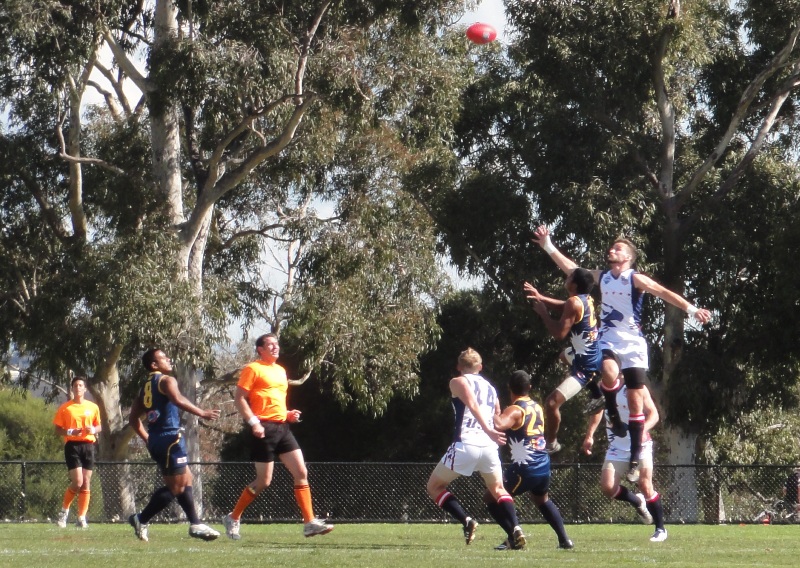