Tonga come into this game with two wins and the just the one win for Pakistan over India.

Every team goes into a game believing that they can win and the Shaheens had the strategies to counter the physical presence and skill of the Thunder.

The Thunder were into immediate attack and #17 Haseeb Qureshi was already defending stoutly for the Shaheens.

The Tongans were kicking long and high allowing #15 Alex Fakatoumafi to mark strongly and goal. When the Shaheens could manage to get the ball into the open they good football and one such passage they pushed the ball to #24 Jaffar Mehdi who goaled from the angle.

The Thunder re-applied pressure  allowing  #14 Peni Mahina to snap a goal bouncing past a defender. He and #17 providing a focus up forward bullocking hard and #22 pickalafi Tuione Nai snaps truly from a pack.

#15 Alex Fakatoumafi is everywhere leading, marking and missing only to repeat and goal from the angle. He almost had another but the umpire ruled he had infringed in the marking. Tonga had now gained the ascendancy and the Shaheens where already feeling the pain with #20 Ovais Rehman taken from the field. 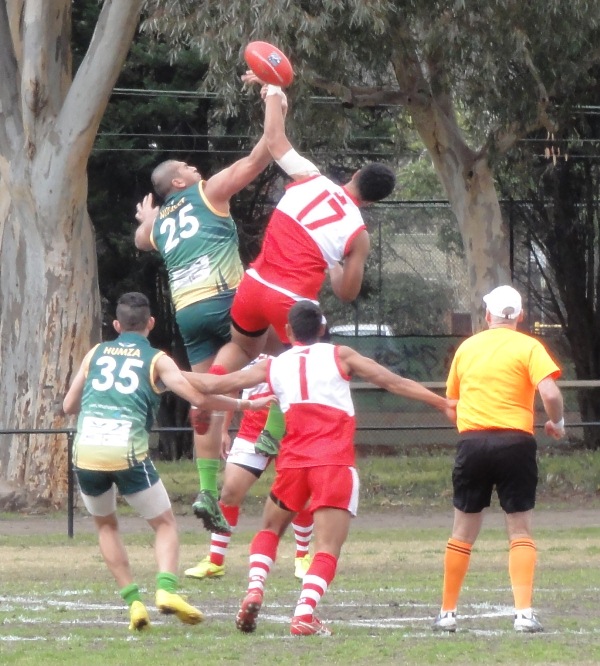 The Thunder continued on in the second quarter. . #15 Alex Fakatoumafi marked a dropping ball to goal from 35m on 45 degree.

#14Peni Mahina passed to #20 Kisione Taulani slotted through a goal and had a second touched. #8 Bilai Khan lay on the ground from a heavy shoulder charge and looking around there was another Shaheen lying on the ground and soon after a third. It’s looking like a battlefield. The onslaught continued with #7 Natani Lihali breaking a tackle to pass to #22

PiokalafiTuione Nai for a mark and goal. Another Shaheen #26 Rohail Akhtar is down – the umpire indicating a kick but they are still defending gallantly. #21 Thunder roving the pack snaps truly.

#22 Piokalafi Tuione Nai marked from bomb to score a point and then repeated the mark to unselfishly pass for a resulting goal.

The Shaheens returned recharged after the break. #10 Zaheer Hussain consistently marked defensivelyaided by#17 Haseeb Qureshi and passed the ball well to turn the flow around. But #18 Semisi Folosa tuaefeweaved his way passed opposition to goal from 35m. Followed by a #20Kisione Taulani mark and goal. They frittered away many other chances.

The fourth quarter saw the Tongans full of vigour rotating freely off the bench. Sometime during the last quarter the Shaheens ran out of bench players and the Thunder profited, scoring easier and controlling the game unto the end.