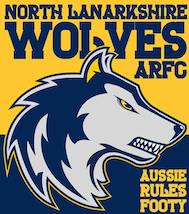 Australian Rules football in Scotland is certainly taking plenty of twists and turns throughout 2014 as it prepares for a bigger and brighter future. Whilst the Aberdeen Eagles had to withdraw temporarily from the SARFL for 2014, that void is quickly being replaced and more by the emergence of a wave of new clubs positioning themselves for potential full competition in 2015.

Recently, World Footy News reported on the emergence of another local club in Falkirk Silverbacks to expand Scottish stable, but a further side hit the ground running in the same area: the North Lanarkshire Wolves.

Nikolas McGuire is the driving force behind the new North Lanarkshire team, a council district heralding from the outer eastern suburbs of Glasgow and extending almost to Falkirk. His connections to the Glasgow Sharks have led to another team growing in this fertile Australian Rules football catchment.

“The reason behind the Wolves is that we were travelling into the city to play for a very strong Glasgow team. The success of the Sharks, getting in excess of 40 down to training, left us feeling confident in looking at opportunities within our own area.”

“North Lanarkshire covers a decent amount of space in Scotland, and the council has recently pumped £110 million into facilities and grounds over the last six years.”

“We spoke with the Senior Sports Development Officer for NL Leisure, a charitable trust set up by the council, who was very keen to bring Aussie Rules to the area.”

“We are working with him to offer taster sessions in Active Schools and community centres, and we have approached the main Youth Centre to offer sessions to the kids they get through their system.”

“It's an exciting time for AFL footy in Scotland, following the Scotland victory over Spain yesterday with a group of exciting players that have recently emerged from our clubs.”

“My goal is to grow the game here, raise awareness and make a difference. I am pleased to have the opportunity to do this with the North Lanarkshire Wolves. We haven't even kicked a ball yet but the recruiting process is in full swing and interest is very high.”

“We are really lucky to have been supported by the [Glasgow] Sharks and the [Kingdom] Kangaroos so far, as well as local businesses. It’s a humble start to what I hope is a long journey.”

It is certainly clear that the continued work and successes of AFL Scotland, SARFL and also the Glasgow Sharks and their own local Caledonian Australian Football league is paying huge dividends as North Lanarkshire, Falkirk and maybe more clubs (watch this space) now sprout from the tilling of the local soil.