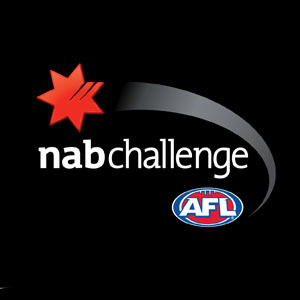 This year a carnival of football will headline the return of Australia’s game as the 2014 NAB Challenge rolls into every Australian state and territory with 18 games in 18 days.

The 2014 NAB Challenge will kickoff  with Wednesday’s opening match in Geelong where the Cats will host Collingwood at Simonds Stadium (7.10pm local time), the first of 18 consecutive matches to be played over the next three weeks.

The full international broadcast schedule can be seen below.

The AFL’s new-look pre-season competition will see the game’s biggest names and brightest young stars compete at venues around the country while each region will have the chance to engage in a range of community and grassroots events as part of the carnival of football in each location.

In addition to 18 games in 18 days, each regional and metro venue will host a number of events including local business networking breakfasts, local coach and umpire forums, NAB AFL Auskick clinics and a range of other community activities.

“This year’s NAB Challenge really is a carnival of football with the AFL rolling into town right around the country.

“We think supporters will enjoy 18 games in 18 days and the next three weeks will not only give fans the opportunity to see how their club is shaping up in 2014, it’s also a chance to take the elite competition to many regions that wouldn’t normally get the chance to see their AFL heroes play live.

“This year’s NAB Challenge isn’t just about the football, it’s about connecting Australia’s game with local communities around the country, which is why we’ve introduced a range of additional local events and activities to complement each match. The backbone of our game is made up of the many local supporters, players, coaches, umpires and administrators who play such a vital role in growing the game, so we’re pleased to be able to engage these communities away from the football field.

“The revised format supports the view among clubs that two competitive matches provide the appropriate pre-season preparation for the regular season. The format ensures all clubs have a minimum six-day break between their games and every match has been scheduled either as a night game or late-afternoon match to avoid the peak heat in the late summer period

“We will continue to focus on Footifying people right around the country in 2014 and the all-new NAB Challenge is the perfect opportunity for us to deliver on this mission," he said.

"It gives us the chance to take AFL football to regional communities that don’t ordinarily experience the game at this level. Our employees and customers in regional areas such as Townsville, Joondalup, Wangaratta and Ballarat are eagerly awaiting the first bounce – it’s a real treat for them to receive live AFL action in their home town.

“The NAB Challenge also gives fans the chance to sample what lies ahead for the premiership season; coaches such as Paul Roos and Alan Richardson taking the reins at new clubs, young players such as Tom Boyd, Josh Kelly and Jack Billings debuting on the big stage and established players, such as Lance Franklin taking the field for a new club. It really is an exciting time of year,” Mr Ramsdale said.

“We’ve been Footifying Australia for more than 10 years through NAB AFL Auskick, the NAB AFL Rising Stars Program and now, the all-new NAB Challenge. Our longstanding partnership with the AFL is one of the many ways we, as an organisation, are committed to giving more, taking less.”

For the second successive year the AFL is pleased to announce Australian Red Cross as the official charity partner of the 2014 NAB Challenge. Volunteers will be attending a number of matches throughout the competition, collecting donations on behalf of Red Cross with money going to a variety of programs, including Red Cross Disaster Relief and Recovery which supports those who have been affected by bushfires and natural disasters around the country.

All approved Laws changes for the 2014 Premiership Season will be implemented in the NAB Challenge, including:

§  Increased sanctions will be applied for medical staff or trainers who deliver coaching messages; trainers are permitted to enter the playing surface from the bench during play