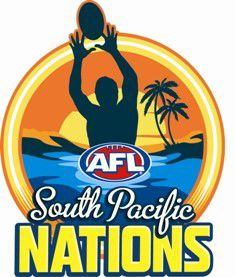 The article below is courtesy of the AFL Pacific - WFN had their own correspondent at the event and a full WFN report on the day will be available in shortly.

The New Zealand Hawks proved too big and strong in a hotly contested affair against the best of South Pacific under 18s on Thursday night. Conducted as a curtain raiser to the St. Kilda vs Sydney Swans AFL home and away match at Westpac Stadium, there were over 3000 spectators in attendance to cheer on New Zealand.

AFL PNG had six participants with Jeconiah Peni having an outstanding match in the midfield. Theo Gavuri had a serviceable game and Alphonse Jambafuro worked his way into the contest after a slow start. Chris Mong took a spectacular mark in the last quarter and kicked truly to record the South Pacific's third and final goal. PNG's Michael Macca (groin) and Jason So'ong (hamstring) carried injuries into the match and were unable to have a significant impact

The South Pacific young men participated today in a huge come and try day at the famous Basin Reserve Ground. St. Kilda players attended and our boys assisted them to conduct clinics and play 9-a-side football.

A return match will played on Sunday at Hutt Reserve on Sunday where the young South Pacific squad hope to turn the tables on their open age New Zealand opponents.