At the beginning of April, and almost buried amid the rash of local, state and national representative carnivals played over the recent school holidays, was the trip undertaken by the Cairns Lions U17 representative team. This annual pilgrimage to Victoria sees these boys try out their skills and talents against southern representative teams.

The games are a part of the Victoria Challenge program, designed to expose players from leagues far removed from the epicentre of the game to the increased standard and tempo of more developed competitions. AFL Cairns has supported the project for a number of years, in the past having played against the Essendon District League and Geelong College.

This year the team from the north played against the Ballarat Football League team and also the Riddell District team. Not only do the boys get to play in these games, they are also exposed to the whole gamut of Victorian footy. This year they were guests at the Round 2 AFL clash at the MCG between Carlton and Collingwood. They also received great advise from a former Essendon star, and coach of the Eastern Ranges TAC Cup team, Darren Bewick. The idea is to immerse these boys as much as possible into the whole culture of Australian Rules football in the state where it all started.

The first game was against Ballarat at the beautiful City Oval. The boys found the going tough against the boys from Ballarat. Cairns Lions player, James Philip, said “I was just so surprised at how much tougher the game was there. [It was] much tougher than back home.” The final score saw Ballarat win comfortably 15.9 (99) to Cairns Lions 8.7 (55). But the 44 point defeat taught the Cairns crew some valuable lessons.

Game Two was played against the Riddell District team at Digger’s Rest. In another hard fought battle, the Cairns team showed how they had adapted to the tempo, toughness and skill levels required at this level. What followed was a cracking game that was not decided until the final minutes when the Lions hung on grimly against a fast finishing Riddell team to win by just 5 points. This was only the second ever win recorded by the Lions in these Victorian Challenge games. The final score saw the Lions 10.6 (66) defeat Riddell 8.13 (61).

The objective of the program is to try and fast track the development of Cairns players who are just reaching that critical age where choices about their future in the game will be made. It is hoped that the program can benefit the Cairns players in the hope of producing the next Courtney Dempsey, Jarrod Harbrow, Charlie Dixon, Peter Yagmoor or Sam Michael – all current AFL listed players who have started their playing days in Cairns.

Lions player James Philip had the final word when he said, “it was tough, but it was a great experience.” 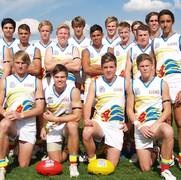