NZ to take on South Pacific on ANZAC Day 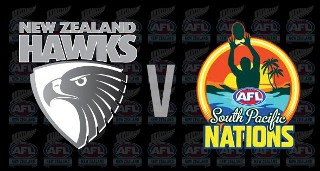 The New Zealand Hawks senior team will take part in a two match series against a South Pacific selection.  The first game will be the curtain raiser to the AFL match at Westpac Stadium and commence at 4.30pm.

The NZ Hawks team last played in January at Wellington’s Westpac Stadium against the Australian AFL AIS Academy team. The New Zealanders performed well against the elite youth of Australia but were defeated by 41 points.

The South Pacific team will feature several International Scholarship recipients that no doubt have the talent but will need to overcome the seasoned experience of the New Zealand Hawks contingent.

The second game will be at the Wellington AFL’s home ground of Hutt Park at 12.00pm on April 28th.  This will be a great opportunity for locals to view the game up close and from the boundary line.

Meanwhile the media campaign to promote the ANZAC Day AFL match in Wellington continues with serious intent, as St Kilda have hosted a Kiwi media contingent at one of their training sessions.  See St Kilda keen to convert Kiwis to AFL code.