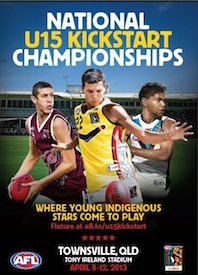 On Monday 8th April the northern city of Townsville will again become a major hub of football action as it hosts the 2013 indigenous Kickstart Championships.

As stated by Kathleen Newman, Townsville regional Manager for AFL Queensland, “These championships, held from 8-12 April, [will] bring together around 150 of the most talented indigenous players from around the country and is sure to showcase some very exciting football. There is every chance spectators will see the next Cyril Rioli, Lewis Jetta, or Chris Yarran, running around.”

The matches will take place at Tony Ireland Stadium in Townsville, and is yet another feather in the cap for Australian football in the city as it vies to become a major destination of choice for the AFL. As Kathleen says, “This is a big event for Townsville and is the third part of our already successful ‘Festival of Football’.

Running in conjunction with the Kickstart championships is a separate competition between teams from PNG, New Zealand and the Oceania Region. The championships will culminate in a game between the South Pacific team and a Combined Kickstart team.”

At the end of the tournament the 2013 Flying Boomerangs squad will be announced, featuring the best 25 young indigenous players.

Since the foundation of the Flying Boomerangs in 2006, many players have gone on to forge careers in the AFL, including Austin Wonaeamirri (Melbourne), Leroy Jetta (Essendon), Cameron Stokes (Hawthorn), Steven May (Gold Coast), Peter Yagmoor (Collingwood), Curtly Hampton (GWS) among others.

AFL Queensland have released an article detailing the event which can be found via here.

The full draw for the event can be found here.

World Footy News will publish the results of the carnival in coming weeks. In the meantime, anyone headed to Townsville next week might like to drop in and experience some terrific football and get a look at some of the AFL talent of the future.