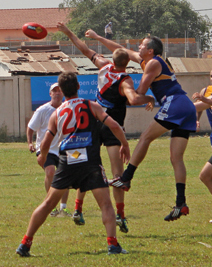 We've been discussing the future of footy in Asia and in particular calls to involve more locals.  One proposal was a peak body to help promote and coordinate the game, including with more internationals and quotas to ensure most players are locals.  The difficulty of getting that started is the cost of travel, something expats normally find more viable.  As it turns out several Asian clubs have already committed to a league in 2013, inevitably to be expat dominated, but hopefully a basis on which to build deeper roots in their adopted countries.

The Vietnam Swans have put forward a proposal to the Asian footy community of an East Asia Australian Football League (EAAFL) in an effort to bring structure, uniformity and increased credibility to Asian football. The eventual objective is to be able to play a home and away series throughout the year, have a ladder and be able to state a premier at the end.

With clubs existing in Malaysia, Singapore, Laos, Cambodia, Thailand, Hong Kong, Indonesia, China, the Philippines, East Timor, Japan and Vietnam, the potential number of teams able to participate is considerably high. Teams of expatriates are generally better funded and would most likely make up the majority, but there is also reasonable growth of teams with local talent.

Malaysia, Cambodia, Vietnam and Thailand earlier confirmed their participation for the 2013 season, and in late breaking news Jakarta (Indonesia) and Singapore have joined in the last week and and just in the last couple of days Laos became team number seven.  More teams may follow suit in the coming weeks.

The rules would be the same to those used by the AFL, with only a few exceptions. There will be no time on, so the quarters will end at 20 minutes, sides may consist of between 14-18 players on the field, depending on the size of the ground and the interchange bench will be uncapped.

There are planned to be two home matches and two away matches for every team in a season, with the ability to nominate already important annual matches, such as the Changi Cup between Malaysia and Singapore, as an official EAAFL match.

If there is more than one match played between the two teams in a year, as is the case between Cambodia and Vietnam, the teams then designate amongst themselves which game becomes the official EAAFL match.

The proposal is moving rapidly, but still in its infancy, so a set of interim rules are being proposed for the 2013 season, to test the waters with teams, schedules and rules, before the official EAAFL is launched in 2014.

On Australia Day, 2013, the first EAAFL match of the inaugural 2013 test season was played when the Cambodian Eagles hosted the Vietnam Swans in Phnom Penh. Due to multiple matches being played between the teams each year, both teams agreed that the match would be the designated EAAFL match, which the Eagles won convincingly 91-45.

The second match of the EAAFL is set to take place between the Malaysian Warriors and Thailand Tigers on 23 February, in Kuala Lumpur.

The EAAFL is a promising step in Asian football, which has struggled for a centralised body and with players generally confined to expatriate communities. Hopefully the new league will be successful and gain interest from the locals and sponsors able to make the event even bigger.  Questions yet to be answered include whether it will strongly push for local involvement, perhaps incorporating some of the ideas discussed in our ongoing Asian series, and will it seek to be a formal peak body. 2013 will be a good indicator to gauge interest, but we will have to wait until 2014 to see how successful the league really is.

Editor's note:  Events are moving very quickly.  We've been in ongoing discussion with Darrell Egan from the Dongguan Blues in China (see our earlier articles), including about the EAAFL and he has told us that he's commenced discussions within China and with the EAAFL organisers to include sides with predominantly local players.  More information to follow when details become firmer.

Editor's Update 4 March 2013:  Unfortunately we've become aware of a controversial newspaper article in which Darrell was interviewed and the article appeared to imply some racist taunts had been made at an Asian tournament, with the implication that Darrell believed there had been racism, though the cited video did not appear to support the accusation.  This appeared to damage the prospects of Darrell working within Asia and put the South China AFL into damage control.  We're lead to believe that Darrell has since withdrawn from footy altogether but apparently unrelated to the above issue.  No word yet as to whether this will adversely impact the Dongguan football program.  In terms of the EAAFL, that is a hopefully long term project involving many clubs and countries. 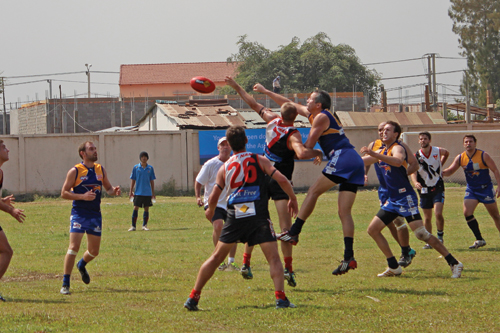