On face value this may seem like a strange analogy. Back in the 1850’s, when gold was being dug up all over New South Wales and Victoria, people were leaving behind their home countries to try their luck on the goldfields. If they could find enough gold they could be set for life. Some succeeded, whilst others returned home wiser for the experience.

Well, it’s happening again, in a much smaller way and for a completely unrelated reason. The lure of Australian football is drawing young men (and women) to the spiritual, geographical and historical home of the game to give it a go and, hopefully, be the next big thing. There are players coming from Canada, the USA, Great Britain, continental Europe, Oceania countries and even Africa for a singular, united purpose… just like the days of the gold rushes.

Articles have been written already about the likes of Gideon Simon and Brendan Beno (PNG), Kurt Heatherley, Siope Ngata, Ben Miller, Shem Tatupu and Khan Haretuku (NZ), Shae McNamara and Eric Wallace (USA), Adam Ballard (England) and Anthony Trigg (Wales), Zac Tuohy, Marty Clarke, Pearce Hanley, Caolan Mooney and many others from Ireland as well as Patrick Ndongo (Cameroon) and Yoshi Harris (Nauru). There are more not mentioned, but all are enjoying various degrees of success in the AFL or VFL. It could be strongly argued that this is evidence that international Australian Rules football is becoming more and more attractive as a sporting option. And possibly more than ever, players believe there is a pathway of success that can be followed from the smaller local stage to the greatest Australian Rules stages of all.

But this migration is not restricted to the “big leagues” in Australia. Increasingly, there are players coming to state leagues and regional leagues and teams in the hope of learning more about the game and possibly finding their way onto the radars of the big AFL clubs, or even taking their new skills back home to help develop the code in their country of origin.

Jim Oertel has been playing for the Burnaby Eagles in the British Columbia Australian Football League in Canada. He has just been given the opportunity to head to Australia and play for the Palm Beach Currumbin Lions on the Gold Coast, right in the heart of the Gold Coast Suns territory. His story is interesting, coming from a non-Australian Rules background. “I originally found footy through Mike [McFarlane – President and Head Coach of the North Delta Juniors in Vancouver]. He did some clinics at our elementary school and we all forced him to start up a league in our home town. I have been playing for 11 years now and started playing senior football at the age of 14” said Jim.

It is a slightly foreign concept for some to think that such pathways exist outside of Australia. They certainly do exist, but there are limitations. Jim went on to say that “the reason for heading ‘Down Under’ is to gain a better knowledge of the game and improve my skill set. I believe I have accomplished all I can playing in Canada with my senior team…both on and off the field. The team [Burnaby Eagles] is also pushing for me to go down too and believe I can do well, which I am very grateful for. It’s great knowing how much your team supports you.”

“I want to play the highest level possible and compete hard and show that Canada is developing some good young talent. I also want to be at the top of my game when the IC14 (International Cup 2014) rolls around to help Canada the best way I can.”

Over in England, Craig Degville plays for the Wolverhampton Wolverines. This year he hopes to fly to Cairns in northern Australia and play a season with the Pyramid Power Junior AFL Club as an Under 18 player. Craig shares many of the same ideals as Jim from Canada. “It [Australian Rules Football] was a foreign sport that I was introduced to by my teacher [Ian Mitchell – President and Head Coach at Wolverhampton Wolverines] and I thought it was so different that I went training with the Wolverines and have loved it ever since. I would love to see where the game originated and want to improve my game and see how much I can push myself to achieve my goals.”

When asked if he had just a hint of desire to find his way onto the radar of the big AFL clubs, he admits “that would just be a dream come true. That would be my main achievement to head for if possible.”

Cairns is also the destination of choice for Elliott Takolu and Bata Jux Kera from Lae in Papua New Guinea. Elliot is older, so will look at linking with one of the senior clubs in Cairns. He also learned of Australian Rules football through school P.E programs. Elliott says that he wants to “play [Australian Rules]footy because it can change things in life, physically and mentally, and my aim is to make it to the highest level in the AFL and I will make it one day.”

Bata was shown a video one day of Australian Rules football by his Deputy Head teacher, Mrs Nalong. This teacher inspired Bata by pointing out that the game can change people’s lives. This led to Bata playing in Lae. Bata explained “I started building my internal interest and now I want to come to Australia to see how the game runs. I want to try my best and be somebody in the future like other stars. I love [Australian Rules] football.” Bata is planning to spend a season with the Pyramid Power Under 16’s in the Cairns AFL.

Each of these players, from different parts of the world, has chosen to embark on a journey full of risks. There is no guarantee of success. There will be setbacks and times where the spirits drop and questions like “what am I thinking” float through their heads. But the fortune seekers of the gold rushes must have had similar thoughts, especially given theirs was more of a life and death struggle.

But if their words are anything to go by, Jim, Craig and Elliott are destined for success at some level, and may yet become the next exciting features on the landscape of international Australian Rules football.

Wouldn’t it be wonderful if they found their own fortune by one day running onto the MCG on Grand Final Day?

That would indeed be GOLD!! 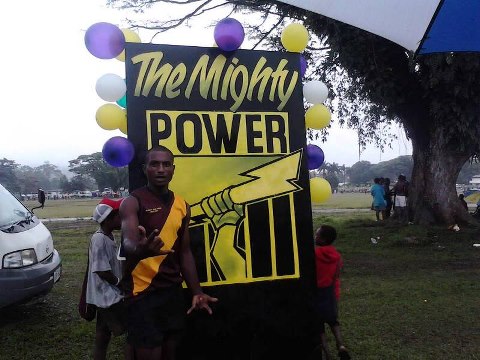