The Yarrabah Boy In The Swannies Jumper 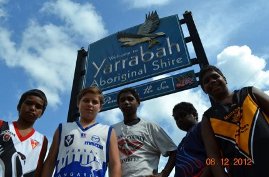 Young Tyrese Bounghi, from Gordonvale State School in North Queensland, probably has to pinch himself every now and then. A week ago he was just another normal 12 year old boy going to school and playing footy.

But last Saturday he wore a football jumper donated by the Vietnam Swans Australian Rules Football Club based in Saigon. Now he is about to become the pride and joy of his home towns of Yarrabah and Gordonvale as a new face of international Aussie Rules football.

Last Saturday saw an International Day in Yarrabah, a small indigenous community east of Cairns, which was organised by local club Pyramid Power Junior AFL Club. At this event, kids from the community were asked to come down, have a kick and wear the donated jumpers from a number of international clubs. These included the Manchester Mosquitoes (England), Reading Kangaroos (England), Dublin Demons (Ireland), Orange County Bombers (California, USA), Baulkham Hills Hawks (Sydney, NSW) and the Vietnam Swans. Photos of the boys were sent around the world, and the shot of Tyrese was seen by the Swannies, prompting the club to request an interview with him to encourage a cultural exchange and further the “Brother Club” concept developed by Pyramid Power.

Initially, Tyrese was asked about his Australian Rules football background. He proudly stated that he played for both the Gordonvale State School team and his local club, Pyramid Power, adding that it was his grandfather in Yarrabah who “played a bit” and introduced Tyrese to the game just three years ago.

When asked if he had a sporting hero, he said there were no AFL heroes, and he didn’t support any national AFL clubs. His hero is still Matty Bowen from the North Queensland Cowboys Rugby League team who has been an inspiration to many young indigenous kids who dream of making the big time one day. When Tyrese was asked whether he wanted to make the big time, he said yes. When asked if he would succeed, he said yes again with a crooked grin of certainty.

He was asked if he knew anything of Vietnam, but confessed to knowing only what his interviewer had told him. At this point, an atlas was hurriedly sought and Tyrese was shown where Vietnam was.

Whether he knew last week or not, one thing is certain. He now knows a lot more about Vietnam and their Australian Rules football team and he has been instrumental in bringing an Australian Indigenous community and people of a South East Asian country one small step closer to each other.

And this whole story is symbolic of the concept of cultures meeting cultures through Australian Rules football., with Tyrese being a beacon of international “brother clubs”. 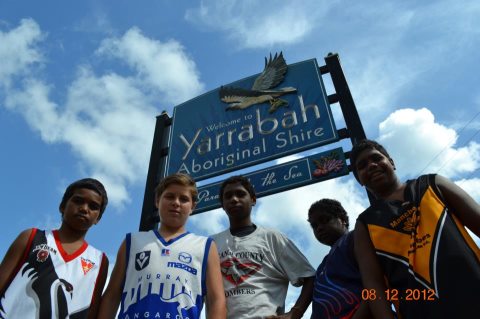