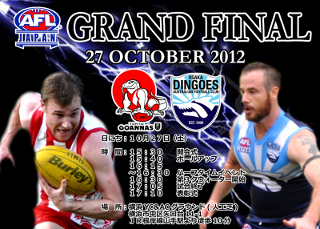 The Japan AFL Top League 2012 Grand Final is to be played this weekend at the YCAC Ground Yokohama Saturday 27th October.

The season decider will be played out between perennial powerhouse Tokyo Goannas and reigning premiers Osaka Dingoes.

The Tokyo Goannas club was founded in 1991 to provide expats and other foreigners a chance to play Australian Rules Football and showcase the game in Japan. The club is community based and today still offers expats and other foreign workers in Japan a chance to play football. The club boasts an American, a Canadian, a Scot, a Pom and a Sydney Rugby convert as well as its share of expat Aussies amongst its players. The club has for many years been the powerhouse of footy in Japan with the club winning four out of five Japan Top League Premierships.

The Goannas Ball is the showpiece event of the year, held in the Australian Embassy it is an important fundraiser for the club and an outstanding opportunity to give the club's sponsors (National Australia Bank and clubhouse sponsor Hobgoblins, Nike Japan and Australian Embassy amongst others) great exposure.

Last year the club had the privilege to give back to the community when a large contingent of club members drove to Tohoku (a place devastated by the tsunamis) to help with cleaning up and relief efforts in the area. A "humbling experience where the Goannas relief team saw Tohoku residents bowing on the streets as they drove by" thankful for the international support.

Osaka Dingoes are hoping to get one back from that mid season loss and go back to back in 2012 (as previewed on WFN back in May). 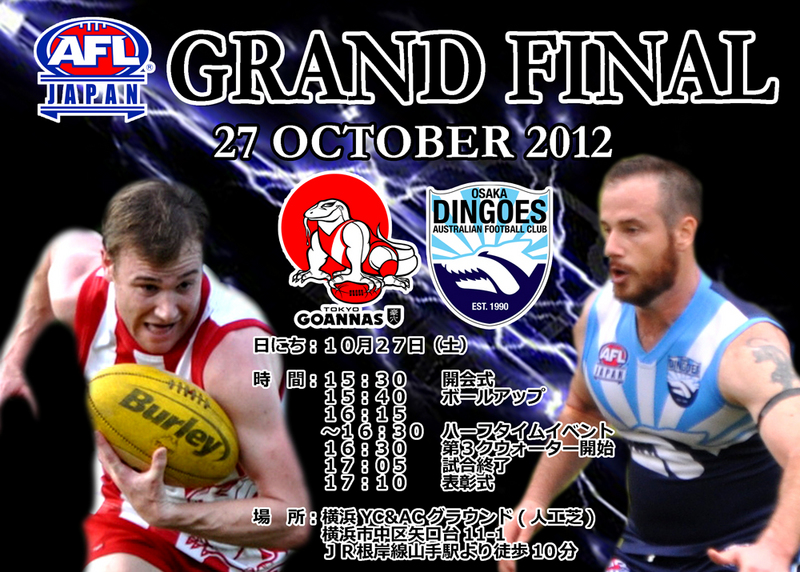