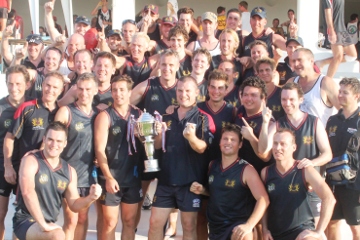 In one of the most tightly contested and entertaining tournaments of recent years, the Hong Kong Dragons have prevailed victorious, claiming the 2012 Asian Champs crown.

The nine competing teams from South-East Asian were treated to glorious sunshine and the pristine fields of the Thailand Polo Club as they arrived at the venue in South Bangkok. The two football ovals constructed side-by-side on the vast expanses of the Polo pitch were arguably some of Asia’s best Aussie Rules playing surfaces.

The tournament format saw each team square-off against four randomly selected opponents in a 2 x 10 minute half; round-robin format. The four highest placed teams advanced to a 1 v 4, 2 v 3 semi-final stage. A modest 2-3 goal breeze favoured one end, adding an extra twist to the games, the battle for each victory very much a tale of two halves.

The first surprise of the day was the shock early exit of perennial grand finalist Singapore. Pitted against three of the four eventual semi-finalists, the reigning champs could not overcome their tough preliminary round draw and a penchant for slow starts. Narrow losses to the reinvigorated squads of Vietnam and Malaysia forced a do-or-die clash in game three against arch-rivals Jakarta. Surging in the latter stages of the game after another sluggish start, Singapore had drawn even with less than a minute remaining in the match. The Bintangs then worked the ball from defence and with barely a second on the clock took a running shot on goal from forty metres out. The siren blared as the ball hurtled toward goal in mid-air, the sound of the leather Sherrin smacking into the goal post and the resulting behind ending the Wombats back-to-back title aspirations.

Hong Kong emerged from the preliminary rounds as the only unbeaten team, doing so by narrowly escaping with a 5 point victory over Jakarta. The Bintangs 3-1 record good enough for third place. The impressive 2012 continued for the Malaysian Warriors as they secured second place with superior percentage, also finishing with a single loss, conceding a 1 point nail biter to Vietnam. The Swans proved how open the battle for the cup was by rounding out the final four with a well deserved 3-1 record themselves.

The round-robin schedule also produced an unexpected mini-final in the last game of the day. First time tourists the Philippines Eagles went head-to-head with the Laos Elephants, both teams without a victory and looking to avoid the unenvied moniker as winless wooden spooners. After twenty minutes of tough, desperate footy, the “Phants” clad in their eye-catching pink guernseys had outlasted the Philippines to the tune of 7 points, consigning the Eagles to the bottom of the table.

As the first semi-final got underway there were more than a few nervous glances in the Dragon camp as the Vietnam Swans controlled much of the early play. Defending well and with the aid of the breeze at their backs, the plucky Swans registered the first two behinds of the match and looked likely to build some real scoreboard pressure. However, as the half wore on, Vietnam was squandering their chances up forward. The class of the Dragons shone through as they snatched back momentum scoring two late goals before the main break.  Kicking against the wind in the last half, the gallant Swans were unable to bridge the gap and were eventually overrun by 19 points. Hong Kong 4.4 (28) def. Vietnam 1.3 (9).

Malaysia made a brilliant start in their quest for a first ever Asian Champs Grand Final berth using the breeze to slip out to an early two goal lead. Their early dominance was curbed by a solid effort from the Jakarta back six who did well to get the Bintangs to halftime only 10 points adrift. The final stanza would prove an epic battle between two deserving teams. The Warriors stood tall faced with the prospect of defending their lead into the breeze, but the experience of the Bintangs would eventually force the first crack in the Warrior armour, a goal to Jakarta edging the Indonesian team back to within 4 points. The final five minutes of play saw the ball reach both goal squares on numerous occasions, the final few metres needed to score a game defining 6 points seemingly just out of reach of both combatants. It was a fortunate bounce and a swooping Bintang snap on goal that broke the deadlock. With barely more than a minute in the game Jakarta had snatched victory from the jaws of defeat. Malaysia would get the ball forward twice in the dying moments whilst cries of “Warriors, we need a goal! We need a goal!” rang out from the bench. The Jakarta full-back carrying the weight of his team refused to concede and the ball was repelled on both occasions. Locked in an exhausted pack of players on the wing, the siren sounded and propelled Jakarta into their first Grand Final in nine years.

Well into the mid-afternoon after an 8am start, the Grand Final would reveal which team had managed their list best in the sweltering South Bangkok sun. Jakarta started well with the wind stunning the Dragons by skipping away to an early lead. Hong Kong had enough of the ball inside their attacking fifty to keep their eager opponents on a tight leash, but crucial misses to the Dragons would see them head into the main break 9 points behind. Hong Kong 1.4 (10) trailing Jakarta 3.1 (19).

The game had slowed to a crawl as fatigue took over and every contest became a herculean effort. Longer halves for the final hinted to the fact the Bintangs 9 point lead might not be enough to see them home. The Dragons rose to the occasion slowly reeling in the deficit and then finally putting their noses back in front. Refusing to give-in Jakarta fought on strongly, but a solid Hong Kong mark and goal from thirty-five metres out directly in front put the game beyond doubt. Finishing the stronger of the two teams, Hong Kong added five last half goals to secure a hard earned and well deserved Asian Champs title. Hong Kong 6.7 (43) def. Jakarta 4.1 (25). 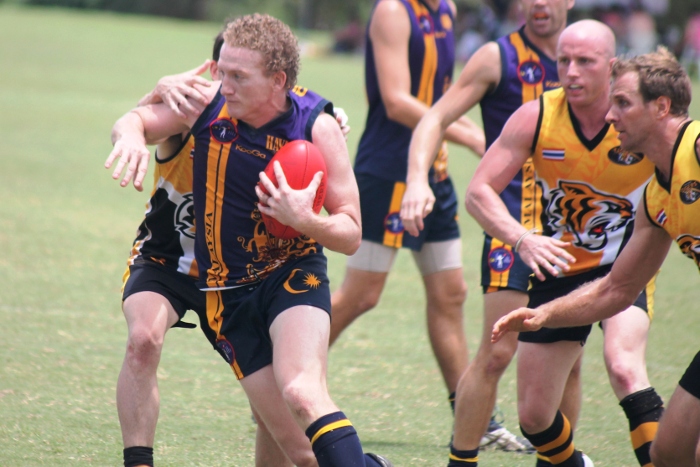 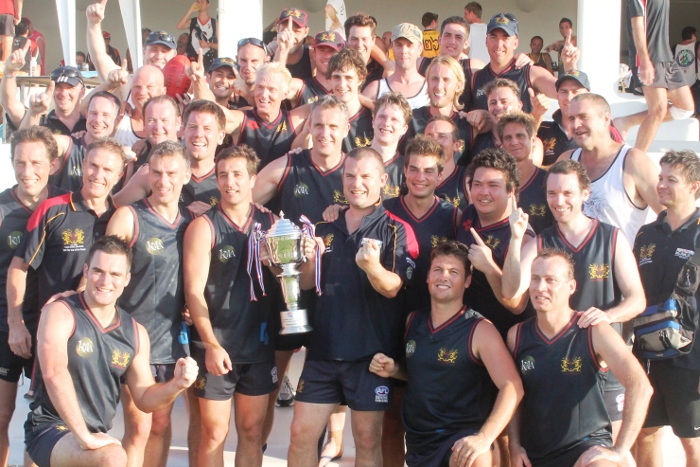