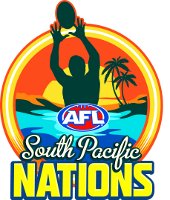 The South Pacific squad has been finalised after the Oceania Talent Combine held in New Zealand back in April, along with the efforts of the combined PNG/Nauru side during the recent QLD state championships.

The main squad includes 11 players from New Zealand, 9 from PNG as well as 2from Tonga and players from Fiji, Vanuatu, and Nauru. As reported recently, Joseph Loulu from Samoa is one of the emergencies along with 2 more from each of NZ and PNG and Kerry Kalatang from Vanuatu.

The NAB U16 championships are scheduled for July at the Blacktown International Sportspark in Sydney. This year will see the debut of the Flying Boomerangs as a part of the tournament as well as the West Australia North-West (Kimberley,Pilbara,Gascoyne) coached by former Saint/Eagle Phil Narkle.