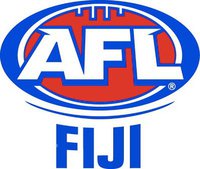 After the debut of Fiji 9s in March last year; the 2012 version kicked off on Friday May 4 at Albert Park with 5 teams and over 60 players turning out.

AFL Fiji reporting that the 5 teams were the Nausori Delta Blues, the Nauluvatu Eagles, the Raiwaqa Bulldogs, the City Swans and the Cunningham Red Hills.

AFL Fiji paid high praise to the players and their team captains for co-organising the first leg of the tournament – as with no sponsorship from the Fiji Government, or the AFL, and no equipment from either, no prizes, other sponsors and since the return of Glen Butler (inaugural AYAD development officer) to Australia also the lack of a development officer.

The captains on the opening day were :

AFL Fiji proudly pointing out that this years’ FIJI NINES goes down in history as the first locally organised and player-supervised footy tournament in Fiji.