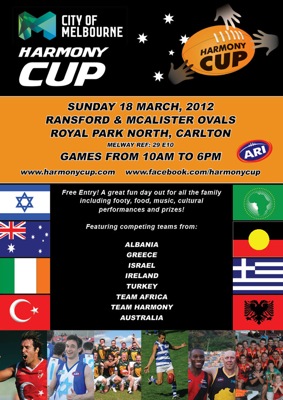 The Harmony Cup is back in 2012, with 8 teams representing Melbourne's multicultural communities competing this Sunday, March 18th.

This year's comp will see the return of regulars Israel, Turkey, Greece and Albania, along with first-timers Ireland. Rounding out the field will be composite sides representing Team Africa and Team Harmony, plus an Australian indigenous team. Each team will play three matches (2 x 20 minute halves) under the banner of their country of origin and in their full national colours.

Albania will be captained by former Melbourne Demons star Adem Yze, while Mick Finn, who starred in the Irish side at the last two International Cups, will be captaining Ireland.

Organised by Aussie Rules International, the Cup will be held at Ransford & McAlister Ovals at Royal Park North, the same venue which hosted the bulk of the Melbourne leg of the 2011 International Cup. Entry is free, and the day will feature food, music and cultural performances besides the footy.

The two teams ranked first and second at the conclusion of the preliminary round of matches will play each other in the Grand Final. The winner will be awarded the 2012 Harmony Cup by footy Legend Ron Barassi.