One of the key areas of the current era of Australian Football internationally is the provision of recognisable talent pathways. The Pacific/Oceania region in particular has access to the South Pacific and Oceania representative squads but also have an advantage of close proximity to Australia. A key benefit is seen with the recent arrival in Queensland of two players from the Solomon Islands (SIAFL) to gain experience playing in Australian competition. Thankfully too, the level of footy in Queensland is of sufficient quality that the lads won’t have to acclimatise to a Melbourne footy season.

Two Solomon Islands AFL players are currently on the Gold Coast in Australia after receiving scholarships to play with Palm Beach Currumbin Football Club (PBCFC) for the 2012 season.

The duo will be playing a full season internationally for the first time in their careers. Freddy Una and David Tema were the lucky recipients, with more than twenty application packages issued to the players before the boys went through physical testing, a written application and an assessment of attitude to deem them suitable to take up the challenge. They will be in Australia for at least 3 months competing in the Pineapple Cup, Queensland’s Division 2 league.

Big thanks to the sponsor of this scholarship, HK Logistics for making the trip possible and also PBCFC for hosting the players. Your support is indeed a life changing opportunity for the two local boys and the experience they will bring home with them will surely boost other local AFL players to work harder.

Freddie started his AFL career in 2006, showing enough potential to make the under 18’s Oceania side at his first International match in 2010. He was also the captain of the Solomon Sharks competing at the South Pacific Cup in Tonga and has since captained the National Senior side last year in the ‘Big Meat Pie’ Exhibition Match vs a mixed Australian Barbarians side.

Whilst his countryman David was only introduced to the sport in 2009 he has worked hard to improve his fitness and skills to the level where he was a key player in defence and the midfield in the Barbarians match. David excelled in the physical testing; winning the sprints, long distance and agility tests and it is this physical talent that helped him stand out to the selection panel.

AFL Development Officer, Eddie Burton gave his view of the talent in the Solomon Islands.

“Both players possess the attitude and skills to succeed at an Australian level. They may struggle to adjust to the size of the players in Australia and the physical nature of play at first but this will be a great experience for them. I believe the Solomon Islands style of play, utilising speed and a running handball game will also be appreciated by the PBC players.

SIAFL has a promising future and as the player base grows with the new competition it is hoped that PBC FC and SIAFL can continue to work together to give the best Solomon Islands players a chance to compete in Australia.”

There are opportunities for other SI players to play overseas if this scholarship program goes well. Players are encouraged to work hard, focusing on skills, fitness and attitude throughout the season and being a leader for other younger players. Best of luck to Freddie and David, work hard and play smart. 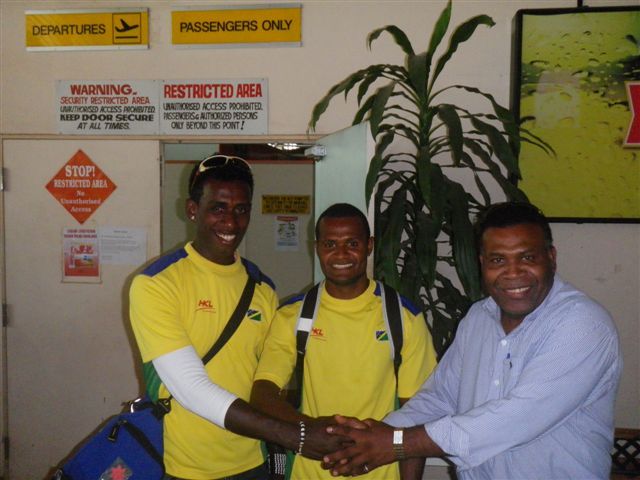 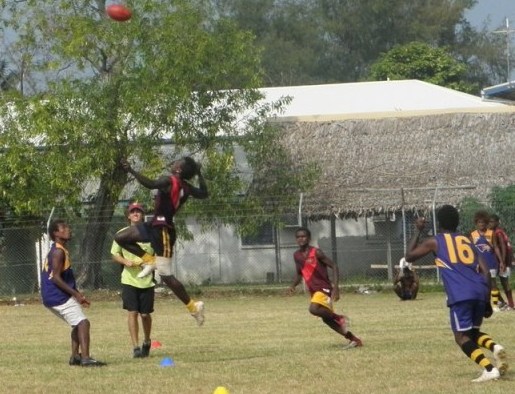 Freddie in action during the 2011 SIAFL season.