GCS using footy to connect youth in UK and India 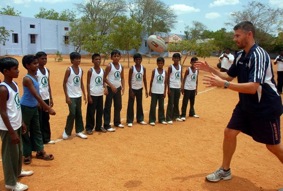 Originally from Adelaide, but now based full-time in the UK, Rick Shrowder has been a driving force behind footy in England's North East for some years now.

Besides this, he is also one of the founders of GCS - Global Community Sports, an organisation using Australian rules football to connect with young students both in the UK and India.

Shrowder explains that Global Sports Global Learning is a project that is using sport to creatively engage with young people. The project, offered both through schools and also through young offender institutes, introduces the students to the sport of Australian Football and then works with the students to create a sports coaching manual documenting their experiences of the project. This manual is then sent to a group of young people in Madurai, a city of around 1.5 million inhabitants in the state of Tamil Nadu, south India. These students then use the manual to learn about Australian Football and report back to the students here about their experiences. It is a six week project involving both practical and class based sessions.

However, whilst the project is using sport as a vehicle to engage with young people, it is more than just a sports project. The project actually explores topics such as global learning, community cohesion, diversity as well as clearly benefitting literacy skills and contributing to improved attendance and behaviour. Issues such as bullying, success and achievement and barriers people face in sport are also addressed.

"My motive behind creating and delivering the project is partly to share my love of Australian Football but also to show how with a bit of creative thinking the sport can really be used as a very effective, life changing educational tool. We are providing opportunties for employment and the development of real life skills both here in England and in south India using Australia's greatest game."

"My ambition is too see more schools in England participating in the program and experiencing Australian Football and then sharing this experience with other young people in other parts of the world."

The program in India has also received some local press coverage, with the article Going for the goal appearing in The Hindu in September last year. The AFL India does not yet have an outpost in the state of Tamil Nadu, but Shrowder is in contact with them and is hoping to further develop a mutually beneficial relationship.

Rick Shrowder is always keen to speak to businesses, clubs or individuals who would like to know more about the project and offers of support. For more information or to make contact, visit gcsprojects.org.