IC11 Behind the Scenes - Volunteers, Media and more 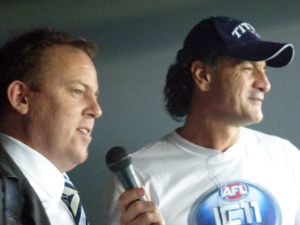 The Volunteers, the Specialists, the Honchos, WFN and other Media…

The International Cup is a major logistical as well as football exercise. It featured several hundred players and officials playing at three main sites, Blacktown International Sportspark, at Royal Park and the MCG as well as one day of matches spread around Sydney. Local volunteers are crucial for a tournament with over 500 players and two weeks of matches. While the AFL provided organisational support – and, crucially, insurance for the international teams – the key people are the volunteers. It is a given that the players arrive with the support of coaches, managers and in some cases trainers, the international volunteers, but the local volunteers are equally important.

The men and women in orange, the trainers and physios…

On the other side of the boundary line, almost, the umpires are the most essential volunteers who make the International Cup go round. Except in the 1850s-60s when the captains were the joint umpires, the men, and now women, in white, and now orange, are essential. The IC11 featured a truly international combination – local umpires from Victorian city, country and amateur leagues and NSW umpires coupled with international umpires, who had, like the players, flown in from overseas. Some came on scholarships, others under their own steam. From St Louis, Missouri, came Jon Mills, looking every bit as distinguished as the British actor of the same name, while also from the US came one of the two Division 1 men's grand final field umpires in Jeff Persson. He was also one of three umpires of the first ever IC women’s match, between Ireland and Canada at Blacktown, along with the game’s wisest (that is perhaps oldest) umpy, Jim McSweeney.  To his credit, Victorian premier Ted Baillieu came to Royal Park not just for the coin toss he also talked to the umpires.

Physios and trainers were central. The physio tables and the trainers’ magic boxes and skills provided the kind of specialist support which footy needs. The trainers were perhaps the unsung heroes….when they were applying bandages, testing muscles for possible tears or giving therapeutic massage…. or, at times, sipping a coffee while waiting to be called onto the ground at any given moment….  One of the trainers, Glenys, who also does duty with the Western Jets TAC team and the Brisbane Lions in Melbourne, suited up for a second International Cup after working at Royal Park in 2008. Always with coffee in hand, except when needed on the field or at the MCG where it was too far away, she is a stalwart who keeps the game going.

The Cup could not have run without the honchos, the AFL development staffers who were there in great numbers, doing much of the hard organisational yakka, even with their not exactly accurate ‘Volunteer’ T-shirts. One was the recipient of the Urban Cowboy’s imagination when the scoreboard became the ‘Peter Romaniwcz’ Scoreboard. Behind the scenes in AFL organisation were the co-ordinators, women’s football development manager Jan Cooper (usually based in Perth), AFL International Development manager Tony Woods and AFL Development head, David Matthews.

Also a feature was the Urban Cowboy, Rodney Grljusich, whether with binoculars in one hand and mike in another perched against a pole in the Blacktown media centre, rugged up against the wind at Royal Park, or besuited in pin stripes with cowboy dress hat at the MCG Grand Final. Tastes in footy and extra-footy metaphors vary (consider Rex Hunt on radio and Dennis Cometti on TV). Yet the Urban Cowboy’s rocking calls added to the atmosphere of many of the matches…and unlike radio callers, he called not for 90 seconds until the other caller took over, he rides the commentary horse for a full match, and then saddles up again for the next one … and then match after match…

Part of the character of the games in the last two cups has come from the verbal theatrics and detailed calling of Grljusich, who at the Melbourne International Cup was perched on an elevated platform. At Blacktown in 2011 as he looked down with binoculars in one hand, mike in the other and team sheets in front of him, taking in a vista of the beautiful Blacktown Oval with its four light towers of 76 lights, he enjoyed the comfort of the Level 2 media room. With a strong musical theme in his commentary (his other self is as a country singer) he has a rich commentary which might inspire in different ways Rex Hunt or Dennis Cometti.  When he’s in form the Irish women’s team was not just firing but ‘their soul’s on fire’ as he called them leading Canada’s Northern Lights towards 3 minutes from the end of the second quarter (2 3 15 to 1 0 6). By this time the Canadian cheer squad was showing goose pimples, with desperate hands on their hats.

The Urban Cowboy offers more than a large plate full of musical rhymes. He also appreciates the quality of the international game and knows what it means. Calling the brilliant football in the match between the Danes and the victorious running Nauruans, IC11 was ‘History in the making. Welcome to football. Welcome to the future – International Football!’     It is not surprising that he has an annual gig as the ground commentator at the USAFL nationals in October (this year for the first time, they are in Austin, Texas)!

The Exotic Media, WorldFootyNews.com, afl.com.au and ….?

The Leader suburban newspaper chain’s photographer came, the SBS French and Hindi programs came, and World Footy News had the biggest presence of all. The media covering the International Cup were indeed diverse and different. The SBS French radio French team covered several matches while their Hindi colleagues followed India’s progress. As always, the Peace Team attracted a media contingent. When Ted Baillieu and Andrew Demetriou made joint ‘big boys’ appearances, it was picked up on most commercial television news services. In Melbourne, radio was more interested (particularly SEN and ABC 774) than the press, which failed to report even scores in their results pages. Print made a belated comeback when the Herald Sun ran a photo of the celebratory Irish on the back of its Sunday Herald Sun sports supplement and when Martin Flanagan – who also did a suburban imitation of Hunter S Thompson by marching with the Peace Team in the Parade of Nations at the MCG – wrote a major Saturday Age sports article on the Cup as a festival of footy. Strangely, the Sydney press was a fraction more fascinated by the great event than the pack hunters of the sports pages of the Melbourne print media.

Amongst the hardest reporting work was done by the experienced volunteers of the World Footy News team, particularly Troy Thompson and with pen, pc and camera, the indefatigable Tobietta Ryman on the ground, Aaron Richard and Brett Northey co-ordinating, which led to thanks from several national team managers. Your correspondent only made a smaller contribution but continues to have an interest in both footy and its culture. worldfootynews.com also contributed to the afl.com.au site due to WFN’s wide coverage of matches, along with AFL NSW/ACT reporter Jordan Laing, while AFL promotion was co-ordinated by Michelle Clyne, and updating the AFL website late into the night was Tanya Dewhurst.

* A note on scoreboards. The scoreboard may also have volunteered too. The scoreboard at Royal Park’s western oval had ‘Aberfeldie vs. Visitors’ (regarding the Essendon DFL team) on it, before the IC teams’ names covered it. However, there was a problem at all three grounds. One of the greatest practical weaknesses of the IC, especially at Royal Park, was the ground level scoreboards which were hard to see from most parts of the ground. Either an AFL contribution towards elevated scoreboards at Royal Park is needed or perhaps some clever inventor will create a device (poles?) to elevate the scoreboards above fence level. 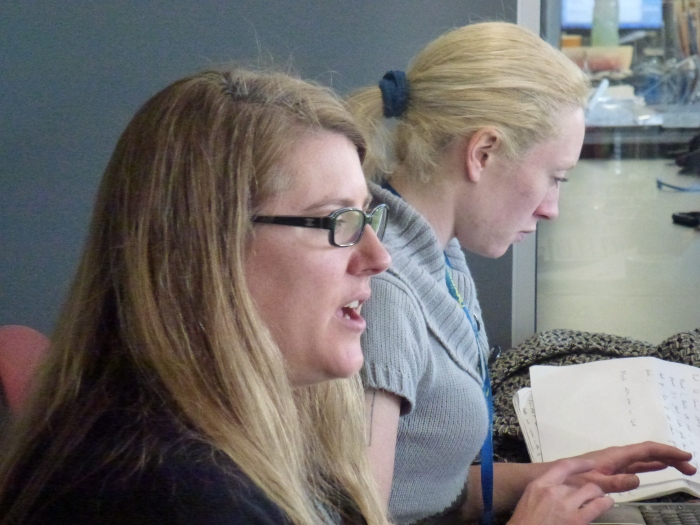 The AFL's Michelle Clyne and WFN's Tobie Rhyman at Blacktown 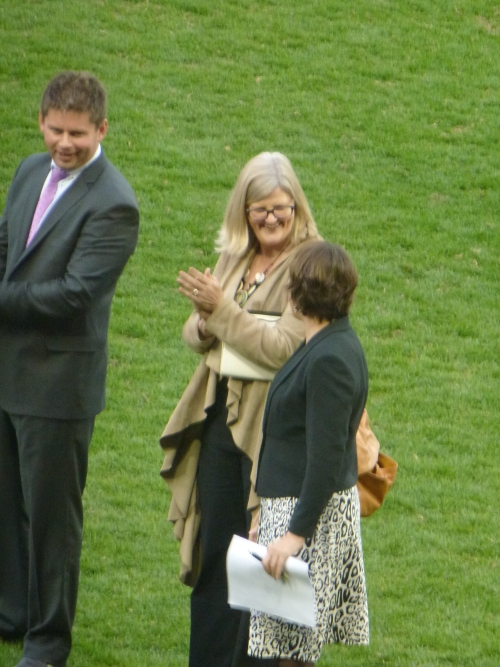 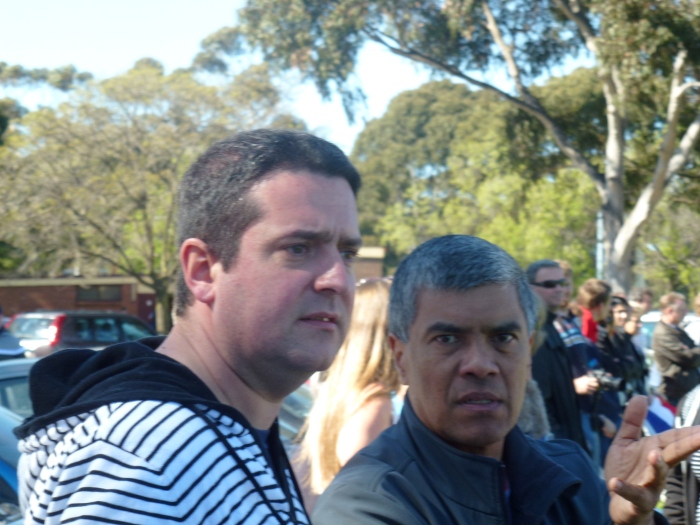 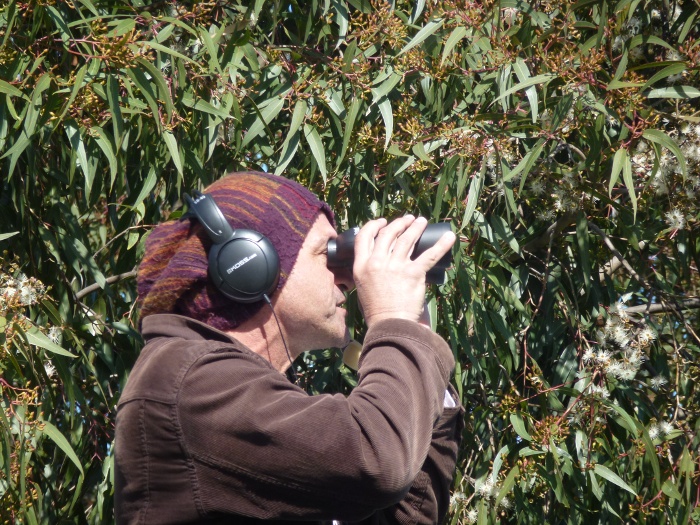 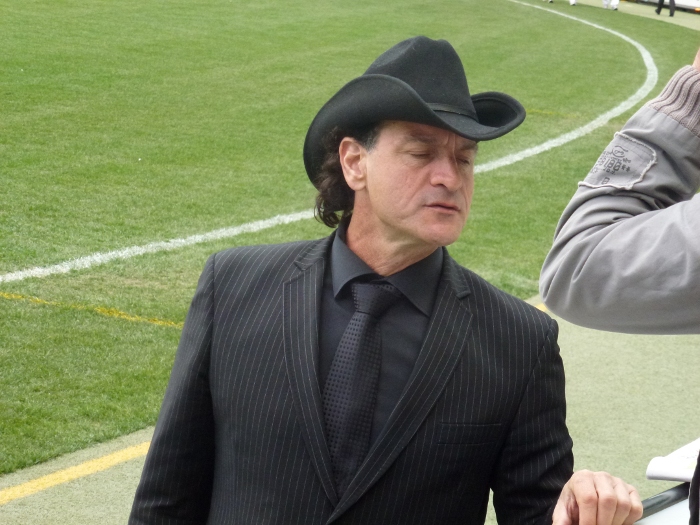 The Pinstripe Cowboy at the MCG 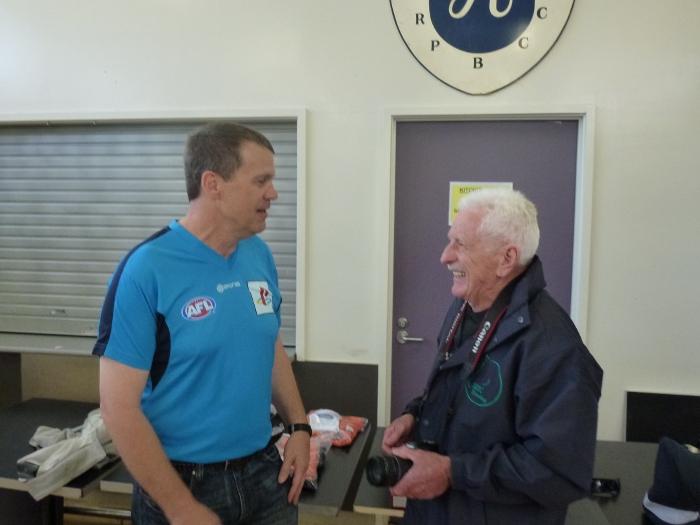 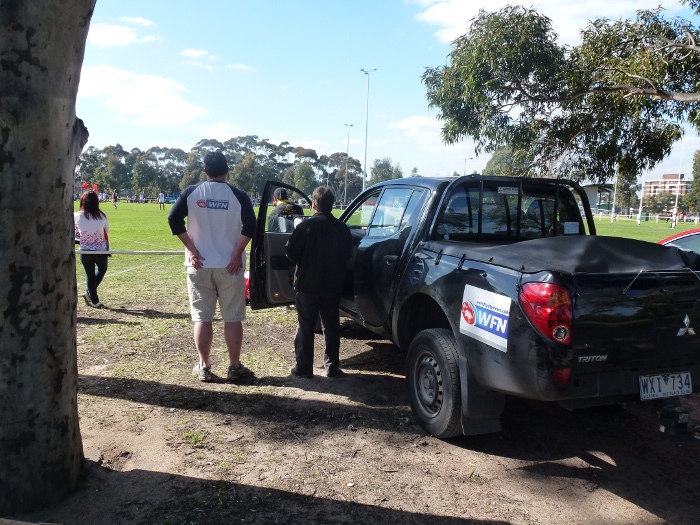 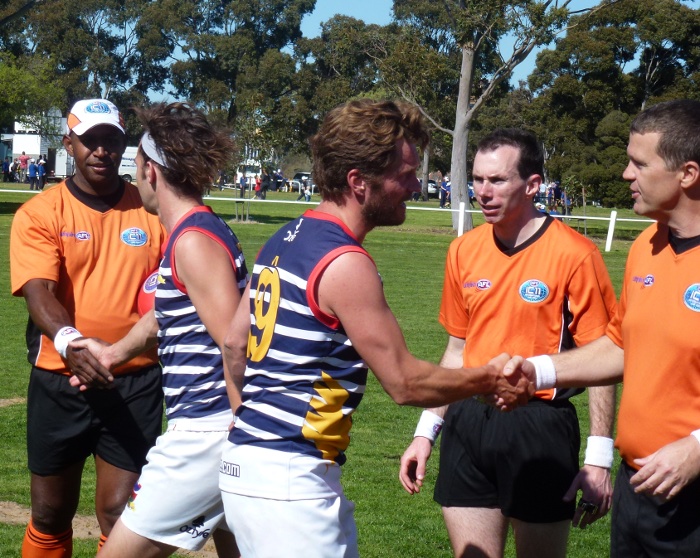 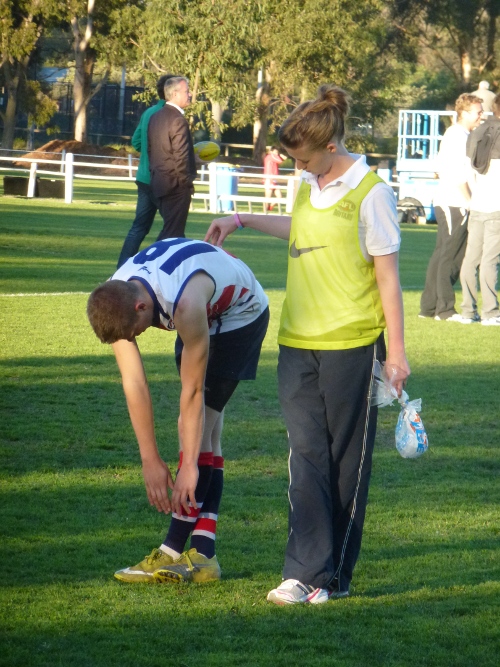 Physios were vital through the gruelling tournament 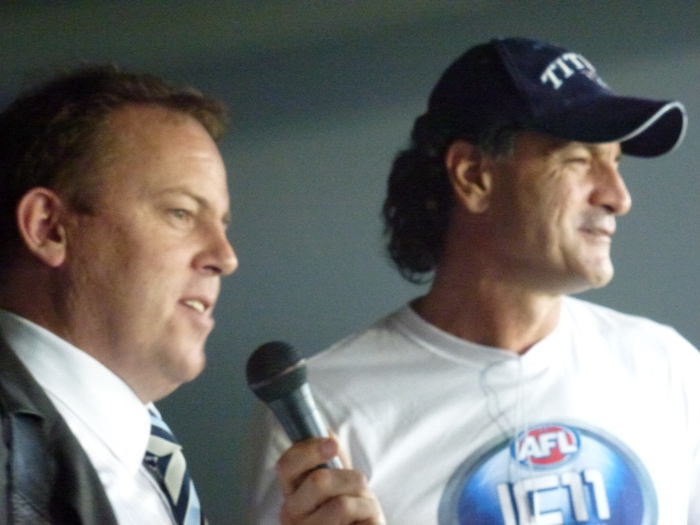 The AFL's David Matthews interviewed by the Urban Cowboy