IC11 Behind the Scenes - players on the move 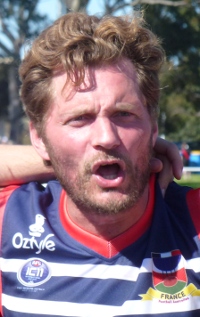 The International and Passionate Game

This is the first of two articles on themes in IC11. It takes up the subject of the diversity suggested by the word ‘international’ in our global world and the way in which footy differs from soccer and other sports in its capacity to transcend individualism. If journalism is ‘history’s first draft’, this is in between… a brief reflection.

An article ‘Behind the International Cup Two… The Volunteers and The Lighter Side’ will follow later.

There are even more stories in international footy than there are in the big city. The Cup IS very international, as it reflects the way people move in the global world.

The 18 teams in the men’s International Cup at Sydney and Melbourne and the five women’s teams have a thousand stories about how they came to footy and the players in their team.

They all have passports – non-Australian ones or they would not be eligible. However, some teams have a lot of players who in the international world may not live in their own country. Ireland, for example, having identified that the lack of local players was a skill and experience weakness held trials in Australia. The Irish league has links with the UTS Bats in Sydney and the women’s league has links with the Bondi Shamrocks, and is developing a formal link with Powerhouse and has connections with Moorabbin, according to Ciaran O’Hara, the Irish President. As early as the 2008 Cup Papua New Guinea was strengthened by their players who were playing in Queensland and Victoria.

In similar terms, the French team has several French players based in Canada while the Canadians have one player, known as ‘Big Burger’, of Dutch origin. In fact France was surprisingly well-endowed with players that had gained Aussie experience, with some at Robinvale in Queensland, one at Mt Lawley in WA and a few others such as Pierre Labigang in Melbourne.

French star Pall Tomas Finnsson, who comes from Iceland, was the player of the tournament in the European Championships. Earlier he lived in Denmark, as did his brother, Jon Hroi Finnsson, who played for Denmark in 2002. ‘Palli’ has lived in France for many years and is one of the key players in the off field as well as on field world of French football. In 2002 and 2008 he played for Denmark in the IC in Melbourne. Since Iceland does not have a team in the IC11 he has been approved, as a French resident and someone intimately involved in French footy, to take the field for les coqs francais. At the same time, two Frenchmen resident in Sweden, under the Schengen Agreement’s open migration borders for work in Europe, played for Sweden, but stood by their ‘Allez les Bleus’ flag during the B division Grand Final against Fiji. One of the ‘Swedish Bleu’ supporters, Gaetan Blonde already has an international footy history having played for both France and later Sweden in the Euro Cup.

Other Australian connections include the historic connection of Japan with Box Hill in the Victorian amateurs and the first ‘scholarships’ to play in Australia, initiated in the 1990s by the DAFL.

In the Canadian team, hiding behind designer sunglasses is one of their best players, who comes from Quebec, although Anglophone Montreal, Kyle Graham. He also comes from a different sporting background. Having grown up playing soccer in Canada, he played semi-professional soccer for Dulwich Hamlet until he was invited by a Kiwi friend to play footy. He played for the Dulwich Dragons in the London BARFL competition, before returning to Canada.

On a different footballing front the US Revolution captain Dan Sarbacker, who has played at Mansfield, played in his third International Cup.

Similarly, coaches travel as in the French trio. France’s co-coach Graham Andrews was based in Paris with the OECD for many years but is now back in Canberra, while co-coach Luke Anderson, who was in Canada for a time, is now in Singapore. Paris-based coach Cyril Talon, when fit a powerful ruckman, travels differently as he rides his bicycle through Paris from his home to his architectural office.

In all sport, coaching expertise travels, apparent to Australians in a country which has ‘recruited’ Olympic yachting, diving, and gymnastics coaches from overseas. Coaches may be nomads but in the future questions will arise about players. Will future ICs have to restrict the number of Australian-based players on a team-list (to six or eight?) lest the IC have a limiting effect on the development of Australian Football in the country in question? Although the changes reflect contemporary global mobility (and specific trends, increased migration to Australia from countries undergoing economic difficulty – from the Pacific nations to Ireland), they may have other sporting results. Could footy development be weakened by this reorientation as at different times English cricket and soccer were enfeebled by the predominance of overseas players?

The footy experience is different from many other sports. It differs even from other team sports, including soccer, which are still characterised more by individualism, according to Canadian Kyle Graham. What appeals about footy is ‘the team spirit, everyone communicating, everyone getting behind each other’. That ‘team ethic’ also appeals to the Irish converts from Gaelic football according to Ireland manager, Ciaran O’Hara.

I remarked on the camaraderie in my article on the first 10 years of the DAFL. Whereas in other sports, players played and then went home, in footy they went back to Williams café / bar in Farum for a drink. A number of women playing for Canberra clubs and the representative team also have remarked on the experience of playing footy.  They too told the story of passion, teamwork and the camaraderie of the team, on the field as well: 'It's really amazing that 20 people can work together…and tactics and be involved in singing to the same tune of music [and by] the fitness' (Valerie). By excitement: 'It's so addictive…on footy mornings your stomach's so full of butterflies and you're so nervous… the adrenaline - there's no other sport can in the world you can feel so excited and nervous and scared and longing all at the same time… it's so passionate'…it's unbelievable - you're hooked' (Alison). And by the mutual on-field support, the trust: 'I've never felt closer to friends…trust…friendship and [protecting] one another'. *

* See On the Margins of the Good Oval: Women and Australian Football 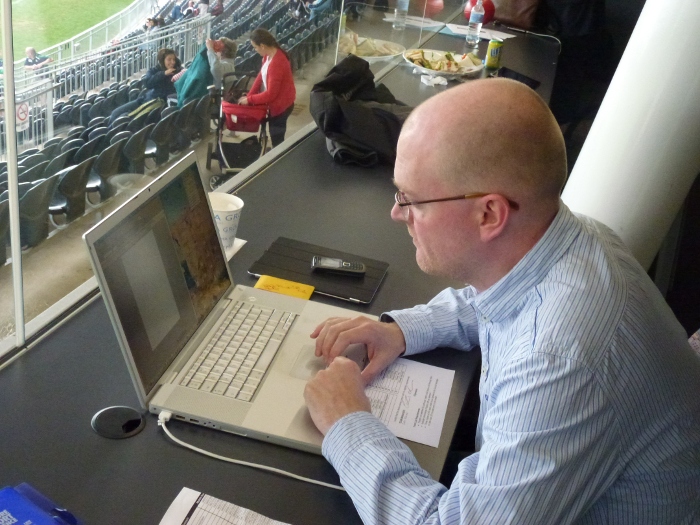 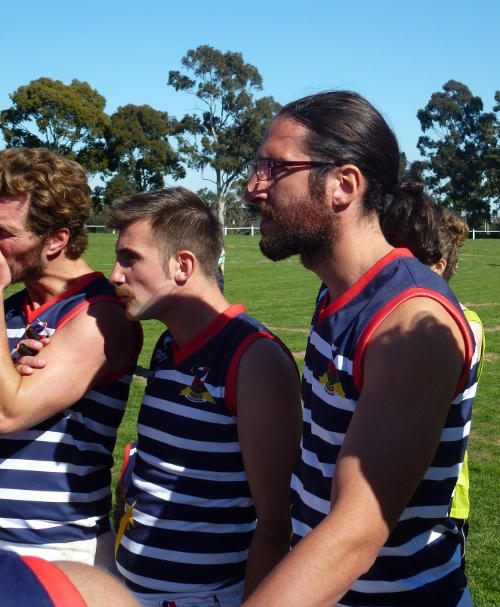 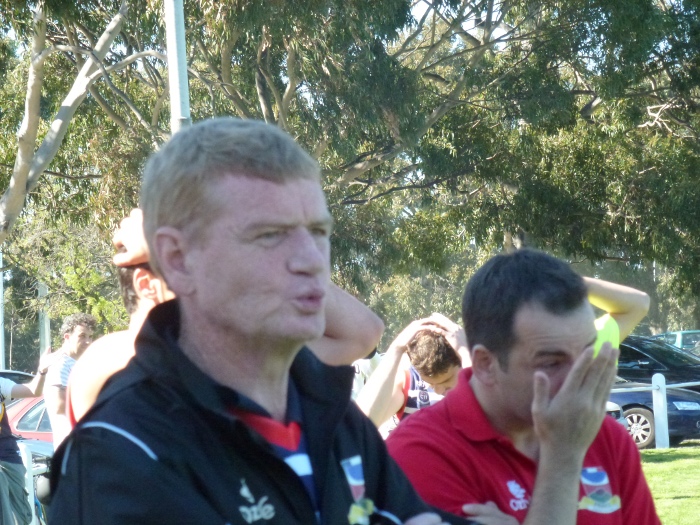 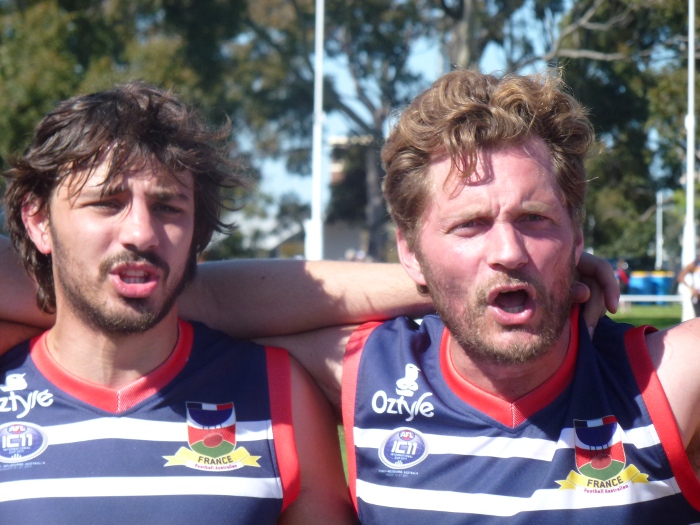 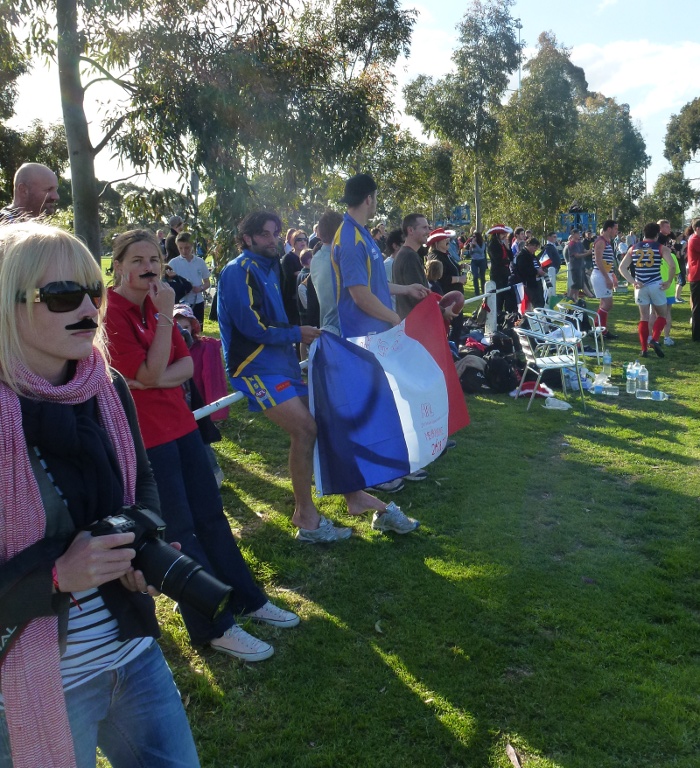 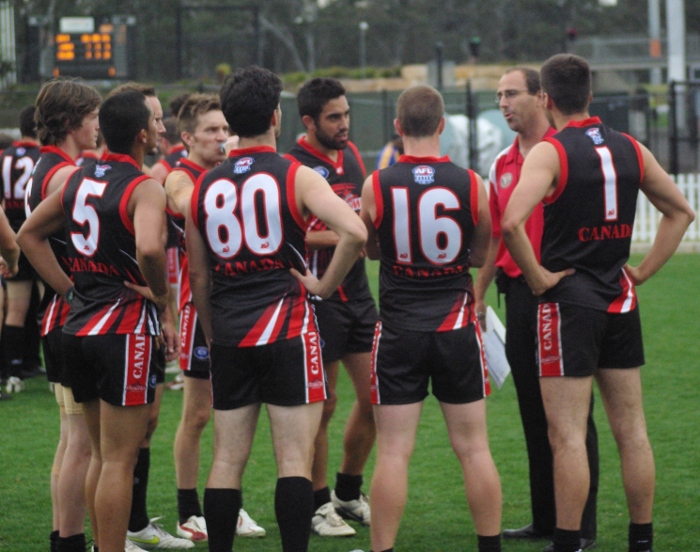