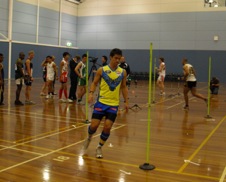 Usually reserved for the AFL AIS academy and Australian potential draftees, the AFL decided to run an AFL Combine for the International Cup for the first time. Each team was allowed to enter a single entrant for the Combine. AFL Combines test a number of general skills, such as speed, agility and jumping ability, as well as more football orientated skills such as handballing and kicking.


After starting with a warm up, the participants first tested their sprint speed over 20m, first registering their wristbands before sprinting through four sensor gates, 5m apart. Each participant got to do each test twice. In this test, the male and female participants showed a clear difference. The fastest men were able to do this in under 3 seconds, whilst the fastest females were 3.5 seconds.

Next up was an agility course, running around 5 poles before finishing through the sensor gates. First the team reps got to jog through the course to memorise the distances and turning angles, then they got two attempts to do the course at full speed. The fastest were able to do the course in under 8 seconds. The Swedish Elks representative was the best at this, followed by the USA Revolution representative (Steve Fashant).


After the sprinting and agility course was a jumping test. First the participants had to stretch up from standing and the equipment, a pole with 100 x 1cm wide soft rotating sticks at the top, was adjusted so the lowest stick was just touching their fingertips. The team reps were then allowed a slight run up before jumping as high as they could and tapping the sticks aside. The touched sticks were then swept aside, leaving the untouched sticks exposed. The reps were then allowed another chance immediately after to try and better their previous jump. Some managed to tap a few extra sticks, and others fell short. No-one managed to clear all of the sticks, though the reps from Nauru Chiefs and GB Bulldogs managed to take out over 90cm of the sticks.


After the general athletic ability tests were over, the participants moved on to more football specific tests. The first one up was a kicking test. Three people on the left and right sides stood on “short”, “middle” and “long” cones, stretching up the hall, and the team reps had to run around a pole, receive a handball, then kick to which ever cone the instructor called out using their left leg for left comes, and their right leg for right comes. Five points were awarded for a clean mark, and three were awarded if the people on the cones needed to take a few steps to get the ball. Most people favoured one leg over the other, and some weren’t able to kick the ball to the end of the hall, but there were a couple of surprises from the PNG Mosquitoes and GB Bulldogs reps who were able to kick to the far cones on both legs. Some of the female participants were not able to kick the ball to the furthest cones, but the USA Freedom rep showed the others that some female players are just as capable.

Finally, the participants had to do a similar test for handballing, with three cones on either side, and people to catch the ball. However, the start was quite different, the instructor throwing or rolling the ball at different angles to see if the reps cleanly caught or fumbled the ball. After that, the test was the same as for kicking, with the instructor calling out a cone and the participant handballing left for left comes and right for right cones. Surprisingly, no-one seemed to visibly favour one hand over the other. This test, like the kicking test, stretched the female participants more than the men.


After the results of the tests had been analysed, the top participants received a football as a prize. The Nauru Chiefs, USA Revolution, USA Freedom, New Zealand Hawks, PNG Mosquitoes, and GB Bulldogs representatives received footballs for their star performances at the first IC11 AFL Combine.  There was much excitement in particular about the leap of Nauruan Johnny Dagiaro, who lept 98cm, pushing Fijian giant Nic Naitanui's record of 102cm.  Anthony Trigg at 205-207cm impressed with elite speed over 20m.

There was also an excellent article about the Combine by Jordan Laing (sharing the IC11 reporting on the AFL website with worldfootynews.com) - see Matter of Time and be sure to watch the video at the top of that page. 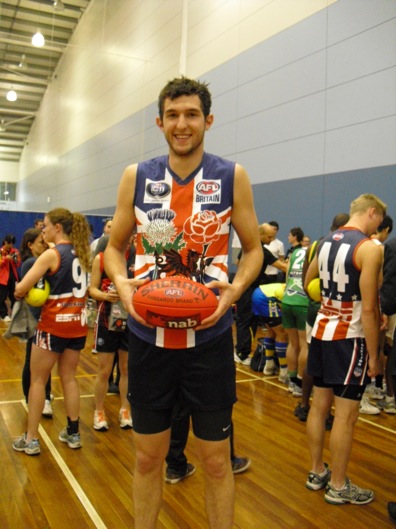 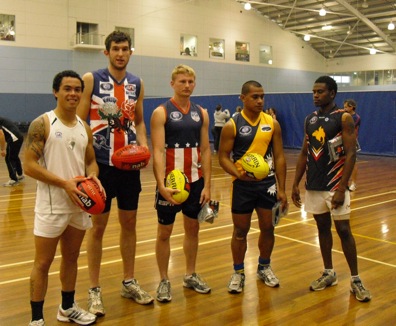