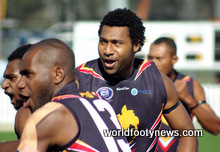 In the first semi final match of AFLIC11 Game Day 7 the reigning champions PNG took on the resurgent USA on Ransford Oval in Parkville. At stake the chance to play for this year’s championship on the MCG on Saturday. The two teams have only ever met once before in the preliminary final at IC05 and on that occasion PNG defeated the US by just one point.

Since that time football has grown in both countries, but PNG growth has been based on junior development while the US growth has been a growth in senior numbers and a focus on sending better players to Australia to enhance their raw talent with solid Australian week in week out senior competition.

While the fast running in numbers style of PNG has changed little in the past two IC’s and has moreso been refined, the US has looked to focus on the fast running game after the big sides they brought to IC05 and IC08 looked a little slow against teams like Nauru and South Africa. They have still managed to maintain height in their current side but it is definitely more balanced and the big men much quicker.

The big addition to the PNG team today was David Meli. The US would have liked to have the services of Shae McNamara coming into the team but had to settle for his constant presence and inspiration yesterday at Collingwood and today around the huddles. 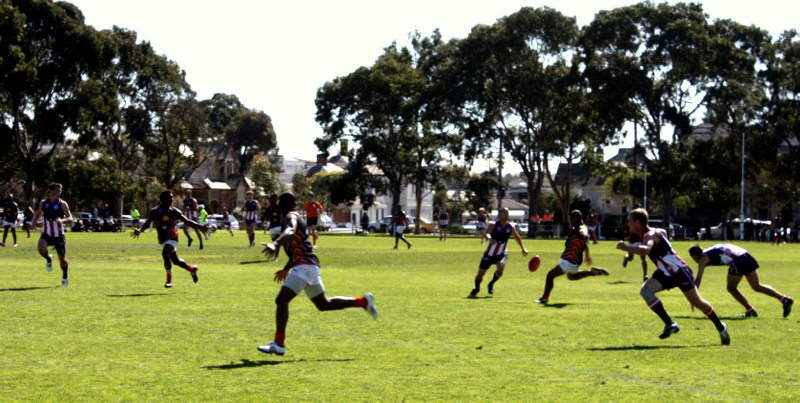 Ransford Oval was in good condition and the weather was sunny and a warmish 20 degrees (well it is Melbourne – note both PNG and US who play the game in summer are used to much warmer conditions). The Victorian premier Mr. Ted Bailleau tossed the coin (and was photographed during the day in a Revo’s guernsey) and Sarbarker elected to kick to the Northern end into the breeze.

Both teams had confident wins on Friday and Saturday and both kicked inaccurately at times. It was PNG who got the ball rolling early through Susuve and as they had done in the past two games looked very dangerous up forward from the word go due to their quick ball movement and multitude of forwards demanding to be the one who kicked the goal. Ali Pinda, Brendan Beno and Susuve all were looking threatening. The PNG return of 2.4 again showed their capacity to blaze away – the flipside of their full on attacking style that can cause wasteful kicking. It meant that after a good start and a goal to the US on the rebound they only lead by 10 points at quarter time.

The decisive quarter of this match would be the second quarter when again the PNG side worked the ball in numbers, it seemed at every pack there would be a quick wide hand ball followed by 3, 4 or 5 handballs. This was enough to open up the Americans and let PNG in to allow a number of leads to be honoured by the running midfielders and for PNG to add four goals three. The US added one of their own and definitely did not look out of their depth. The Revo’s were able to link up series of marks, and take advantage of the overzealous tackling of the Mozzies but their forwards were forced to push up and the ball was continually cut off by willing PNG defenders lead by Tupia.

The third quarter saw the US come hard at PNG in a last ditch effort to make the final. Dragus started to look dangerous, Fashant, Duncan, Vanica, Moyer and skipper Sarbarker all worked hard to cut the supply to the PNG runners, often bring down the chain of handballs and looking damaging on the rebound. Justin Valley also looked like he might spark his team. But for all the effort PNG still increased their lead by a point going into the last quarter, much of the credit must go to the captain Wartovo who seems to continue to be a driving force throughout every game.

In the last quarter stars for PNG were in particular Tiernan Carbry who cut off almost every desperate long kick the US dispatched from their backline and showed great nous in continually switching to open options. Paul Phillip attacked everything that came his way and on another day he and Collins Slim might have kicked 15 goals between them for the match if not for the defense of US backs such as Wheelock and Tyebjee. Donnie Lucero shouldered a lot of the ruck in the second half for the US and won the majority of ruck contests but the Mozzie midfield were able to win a majority of the clearances through hard works and skill exceeding the Americans.

The US still could not be written off until it was proven halfway into the last quarter that they couldn't make a dent in the PNG defense. Ultimately it was the constant run in numbers (a literal swarm of mozzies) today that again showed why they are the reigning champions and favourites for mine, winning by 47 points.

They celebrated with the joy and relief that making a Grand Final can bring. It was an improved performance by USA in the tournament where, if they placed sixth or better, would have achieved their goal to improve on 2008. Mission accomplished. They will now play the loser of NZ on Friday to determine whether their final place will be third or fourth. Their improved performance in this IC will hopefully build the foundation of the next step of footy development in the US.

PNG will look to defend their title against the Ireland Warriors on Saturday at the MCG as the curtain raiser to Hawthorn v Western Bulldogs.