The top seed PNG Mosquitos and Tonga Tigers today battled it out at Holroyd in Sydney’s west (Gipps Rd Sporting Complex) in constant light rain making for cold and greasy conditions.  The large crowd of schoolchildren were thrilled by the PNG war dance and the Tongan Sipi Tau, and the turn out made the atmosphere all the better despite the inclement conditions.

Having already met in the seeding round (a quirk of the draw) it might have been thought that wet weather may have evened up the contest, bringing favourites PNG back to Tonga’s level somewhat,  but this was soon dispelled with PNG kicking 6 goals straight before being followed up with two points.  Tonga could only manage one point for the quarter.

From the first minute of the match there seemed to be a hurt Tongan player on the ground, and Paea was the first.  They were battered and bruised and in many cases by friendly fire.  PNG avoided the larger Tongans by good use of hand, rocketing the ball wide of packs or well out in front, or holding onto it in situations that warranted it rather than giving off a bad option under pressure. 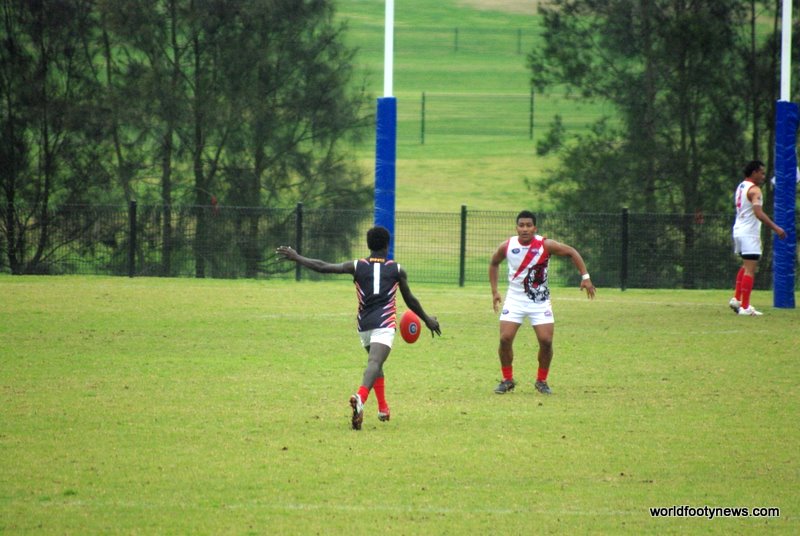 Emmaus Wartovo playing on the forward flank was continually working the ball from the wing (or even halfback) and setting up many goals and kicking one himself.  Brendon Beno kicked his first two for the match in that quarter, also continually showing football smarts in reading the ball coming in, reading the ball off the packs and anticipating what his opponents would do with the ball. 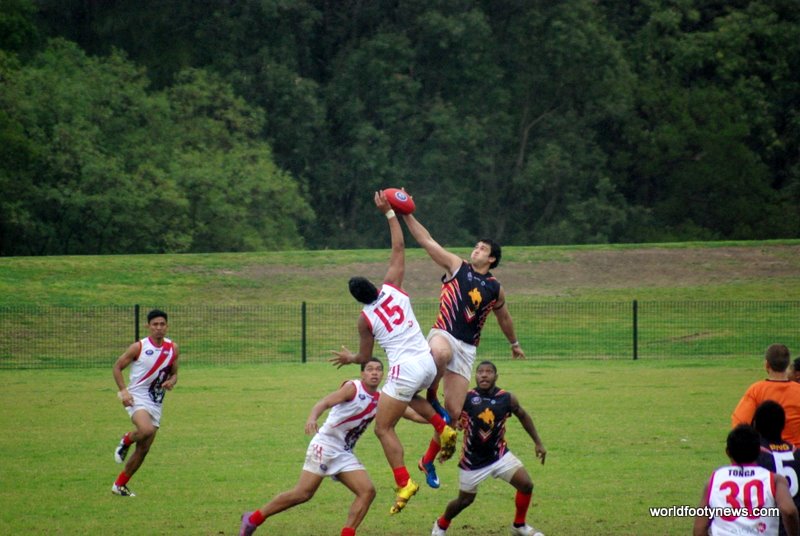 Paea, Loumoli and Nau fought hard for the Tongans in the second quarter but again it was PNG with all the play.  But the accurate kicking of the first quarter had left them as the ball became wetter and they kicked 3.5 which was a poor return given their dominance.  Carbry, John James and Sovare all working well in the middle for PNG.

The half time break wasn't enough rest of the Tongans who were already well weary from their previous fierce match against Nauru two days before.  As they ran out after half time it was clear they were reduced to probably two fit men on the bench, some that could barely walk, one gone to hospital and one waiting for the ambulance. 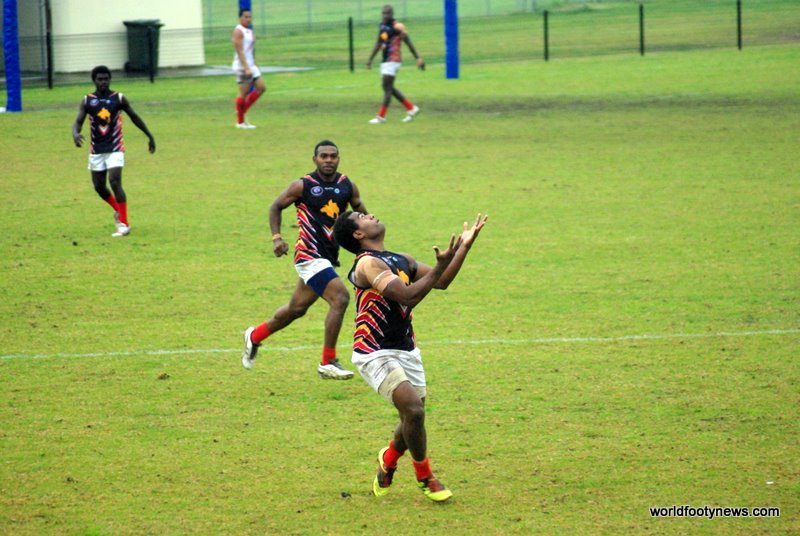 PNG did capitalize on the waning power of the Tongans in terms of winning the ball but again their wasteful kicking let them down.  Wartovo continued to drive his team forward but again they added just three goals for the quarter and twice as many behinds.  Tonga occasionally broke the lines and moved the ball forward but they could manage only a single behind yet again. Nemete and Phillip both kicked goals for PNG. 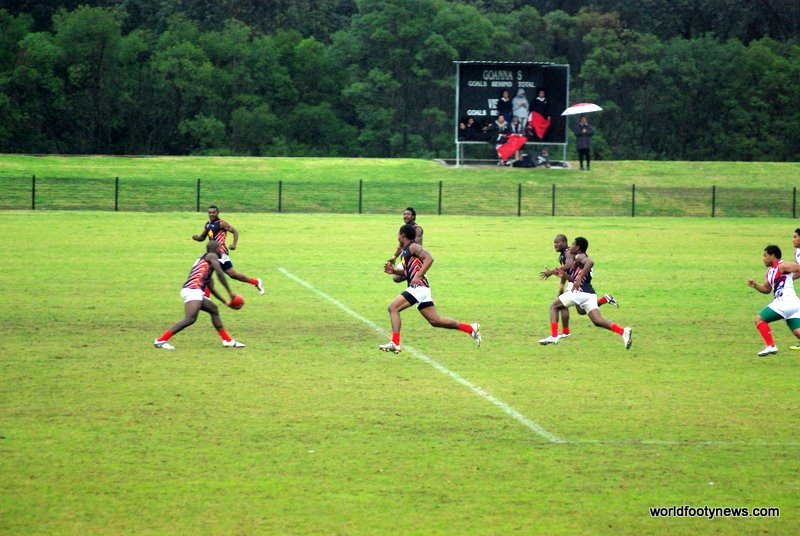 When PNG moved into the forward line they always had multiple options on the lead and it wasn’t hard for their teammates to pick one out.   Peni Mahina, Loumoi and Jnr Ta’ai battled hard but the Tongan’s disposals were becoming more in hope than decisive and PNG pounced on each mistake. 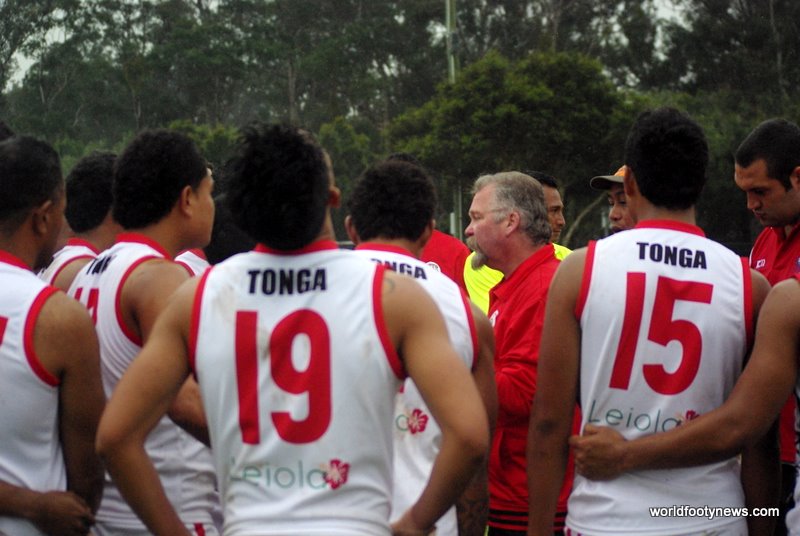 At three quarter time Tonga coach Jim Lucy (formerly New Zealand's coach) told his team how important it was for his team to move the ball away from the packs to runners rather than pushing the ball into packs.  He wanted his team to run out the game and earn the respect of the PNG players and keeping with the team’s constant motto he wanted them to be “Tongan hard.”  This being pressed home as the ambulance was on the boundary line to drive one of their teammates off to hospital. 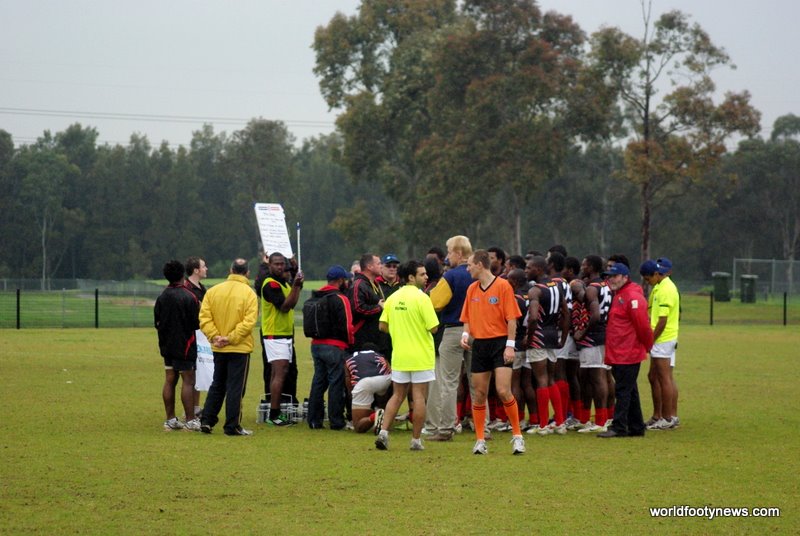 PNG coach David Lake wanted his PNG team to work to have their teammates kick the goals and not be wasteful in their own endeavours to kick goals.  He wanted nine shots at goal for the quarter and got it, but he had to settle for five goals four which was an improvement at least on the last two quarters.   It was the Tongan’s tired legs that probably allowed PNG to do this relatively easily and take more time to steady. 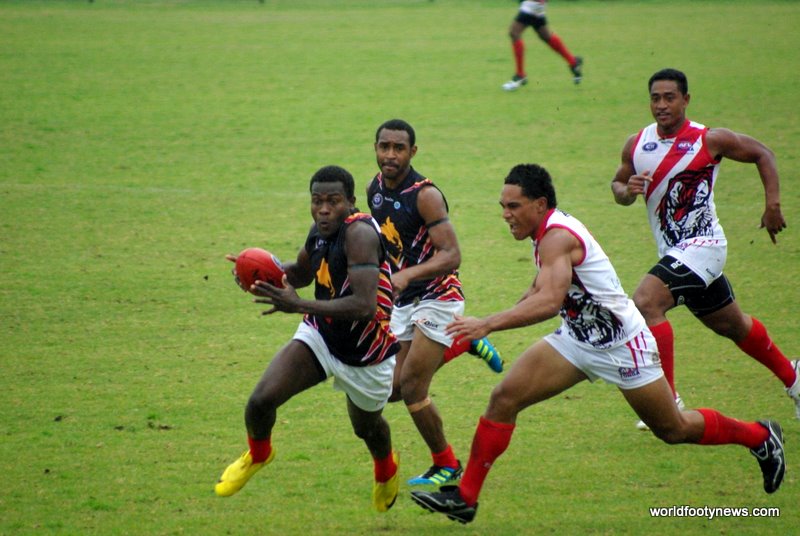 In one of the few heated moments outside the general play of the match Pau’u Mahina was sent off the ground for 10 minutes, leaving his team one man short. 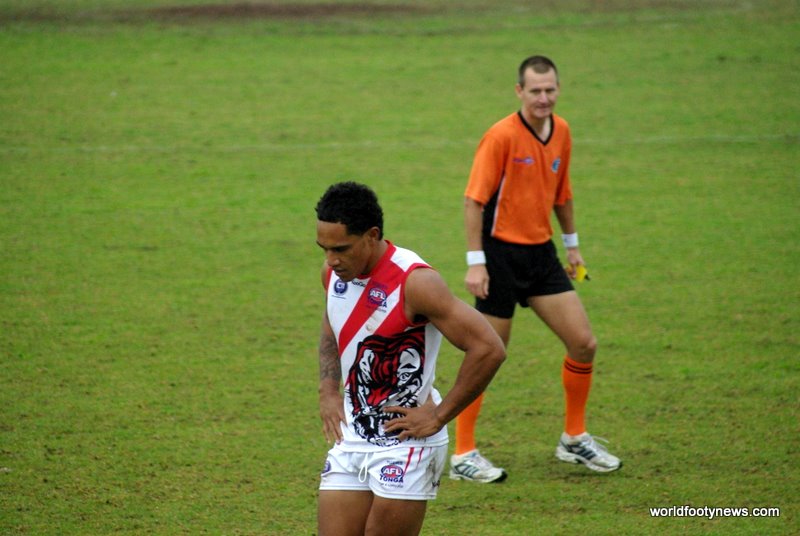 The final margin of 117 points over a team that although inexperienced, has a lot to offer, shows why PNG are the reigning champions and still current benchmark of the competition.  They next play Nauru on Saturday.