worldfootynews.com was fortunate to again be invited to attend, and a review of the three hour forum follows, but the highlights included:

After arriving at the SCG, the International Cup guests were welcomed into the function room by AFL General Manager for National and International Development, David Matthews. He firstly explained about the AFL Commission and how development projects are selected, not so much on a proximity or affiliate location basis, but more in terms of local interest, ensuring that investment proposals had real potential and were financially viable.

Though the AFL recognises the huge potential for the growth of Australian Football overseas, and is committed to investing abroad, for them it is important to first expand the sport successfully to other parts of Australia. Despite the rise in popularity of the AFL outside of the traditional states, and the increase in viewer revenues that brings, 54% of Australia only has two AFL clubs. Furthermore, the lessons learned from expanding the sport into the traditional rugby league heartlands of New South Wales and Queensland will provide a working model for the development of Australian Football internationally where other sports, such as rugby or soccer, are popular.

After his introduction, David Matthews then asked the guests to introduce themselves individually, sharing the highlights of their IC11 experience so far and their plans for development of the sport back in their home country. The response was very positive from all nations.  Following this, the AFL’s International Development Manager, Tony Woods, stepped up to give a presentation on the AFL’s plans for the development of the sport internationally over the next 5, 10 and 20 years.

The past 5 years have been viewed by the AFL as part of its R&D phase. In this phase they have learnt many things, including the attractive nature of the game, existing world class products, such as Auskick and junior programmes, the existence of talented foreign athletes who can switch codes to AFL and compete at the top level, and most importantly, recognising that they cannot judge their success solely by progress in Australia.

In order to capitalise on these findings, the AFL has developed an international strategy which consists of 5 “pillars”:

The next phase in this development it to increase the international player base from 60,000 to 250,000 over 10 years. Recognising the international commercial value and development potential of foreign players in other sports’ top leagues, such as soccer’s English Premier League, the AFL hopes to increase the number of multicultural and foreign players to 5%. This it hopes will drastically increase the interest in AFL in the player’s home country, encouraging more locals to take up the game, and more viewers to tune into AFL games. The increase in broadcast potential is another way to make investment in the local game viable and sustainable.

The idea of holding exhibition games in development hot spots has been a fantastic way to bring top level AFL to the world, and has had huge importance, both as a cultural exchange, and in creating opportunities for local government and AFL investment. Furthermore, riding on the back of exhibition game successes, joint sports development programmes have been successfully initiated in South Africa and Papua New Guinea between the Australian and foreign governments.

However, the idea of holding one or two exhibition games per season is not sustainable as the sole way for promoting the popularity of AFL internationally. It would be many years before another match was played in that region, so the AFL is moving towards annual matches between foreign teams and Australian teams, with the intention of sending Australian teams abroad to compete in events such as the 49th Parallel Cup or the European Championships, and continuing to invite foreign teams to compete in Australian events, such as the Queensland Youth Girls Championships and the U16 National Championships.

From next year, the AFL intends to invite a South Pacific team to compete in the Foxtel Cup, and it is feasible that in 5 years time, teams from North America and Europe may be able to compete. With the rapid development of women’s football in the same regions, representative teams may also be invited to take part in the Women’s National Championships.

Following these insights into the visions the AFL has for the expansion of the sport overseas, due to time constraints there was a slight change of schedule, with the AFL 9’s introduction by Josh Vanderloo, AFL National Participation Manager, being skipped so that the guests could have time to listen to some of the top level tactics employed by the Sydney Swans’ coaching team, Head Coach John Longmire, and Assistant Coach George Stone. For anyone who is interested in AFL 9’s, a rec-footy game similar to football played at local level in North America and Europe, more information is available on the AFL 9’s website- www.afl9s.com.au

John Longmire spoke to the audience first, explaining the job of coaching a premiership club. The Monday morning after a game is reserved for reviewing three videos of that week’s game, and particularly the behind goals cameras are useful for instructing forwards and backs on the correct angles for goal kicking or engaging incoming opposition forwards. After the videos have been reviewed, suggestions are submitted to the coaching panel, and are integrated into the main training session on Thursdays.

As well as the normal weekly coaching schedule, he also explained many of the not-so-straightforward tactics employed, such as hiring a psychologist to determine the best way individual players learn as so best to instruct them tactically, both on and off the field. Different people think and learn in different ways, and it is important to employ different styles of coaching in order to engage players in the way which they can best understand, be that through straight explanations, videos or on-field demonstrations.

Afterwards, the Swan’s Assistant Coach, George Stone, took centre stage, explaining his passion for developing young players, and his interest in discovering overseas talent. There are many factors to consider when selecting a young player for further development, including their skills potential, their build and ability to increase body mass, and their game sense. The latter is very important for players coming into a multi-skill game like Australian Football, as it is not something that is easily taught. Players coming from sports such as basketball and soccer which require 360° awareness can make the transition more easily than players who only have experience of “straight line” sports, such as rugby or American Football.

He also went through some of the transitional stages for introducing a player from another sport, such as Collingwood’s American player, Shae McNamara, who came from basketball, or the Swans’ own Canadian player, Michael Pyke, who transferred from rugby. For the Swans, it made sense to initially introduce the 200cm Pyke as a ruckman, considered a relatively straightforward role. Once the quick learning Pyke had developed a sense for the game they were able to try him in different roles.

Their success with foreign players has encouraged the Sydney Swans to take more interest in foreign players, and look outside the “system” for talented players from other sports and other countries. Videos of the athletes showing off their potential for Australian Football also seem to have been instrumental in the acceptance of both Shae McNamara and Michael Pyke, and watching the home video of McNamara’s first attempts at kicking a football also provided some amusement among the audience.

After a brief stop for lunch, the International Development Forum continued, with a presentation by Kevin Sheehan, AFL National and International Talent Manager. Sheehan introduced the team representatives to the AIS-AFL Academy, a high level talent development academy split into two age groups, which travels around the world playing local junior teams, such as the European Legion juniors team. He also returned to the successes of the World XVIII and South Pacific teams at the U16s National Championships, showing a video of the South Pacific team’s multinational Haka, matched by a war dance from four Somalian boys from the World XVII team.

Finally, Sheehan introduced AFL Combines, intensive training clinics. The AFL hopes to expand the Combines to Shanghai and the South Pacific this year, and to the USA and again to the South Pacific next year. Encouraged by the interest the Combines generated amongst the team representatives, he went further to suggest that there was even a possibility of holding one at the International Cup, when the teams were in Melbourne for the finals leg. Then before the players and team managers moved out onto the sunlit grass of the SGC oval, Sheehan reminded everyone of a quote by former AFL Player and commentator Leigh Matthews: “Give up on the idea that you have to play a lot of AFL to be able to play it competently.”

After a stunning applause, Tony Woods once again took centre stage, answering questions about the development strategies and commenting on new ideas and existing development programmes going on around the world. Afterwards, the guests made their way out onto the pitch, and after a second or two of milling around, taking in the fantastic mix of modern and historical architecture, out came the Sherrins and the football players did what came naturally, kicking the ball around and chasing each other about on the pristine oval. The mix of nationalities all playing together beneath the towering goal posts was a true spectacle to behold, a mirage through the hazy sunshine of the future of the Sydney Swans, the AFL, and football in Australia. 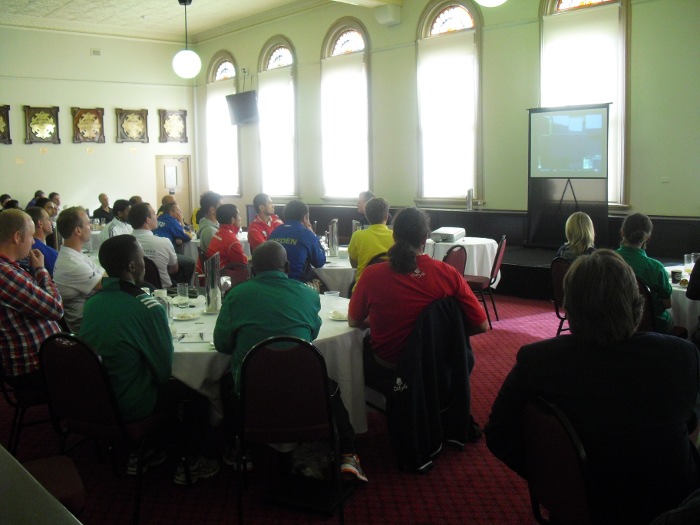 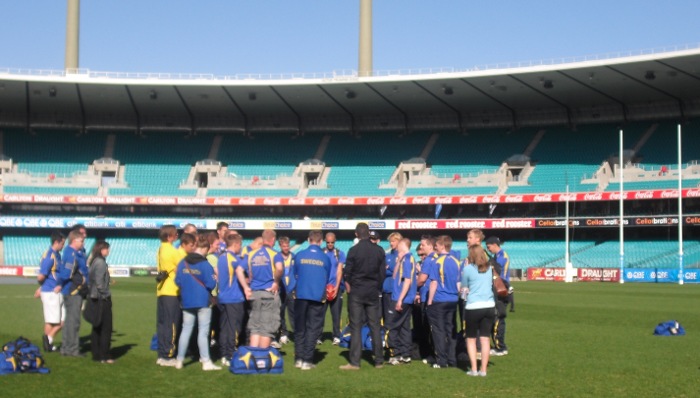 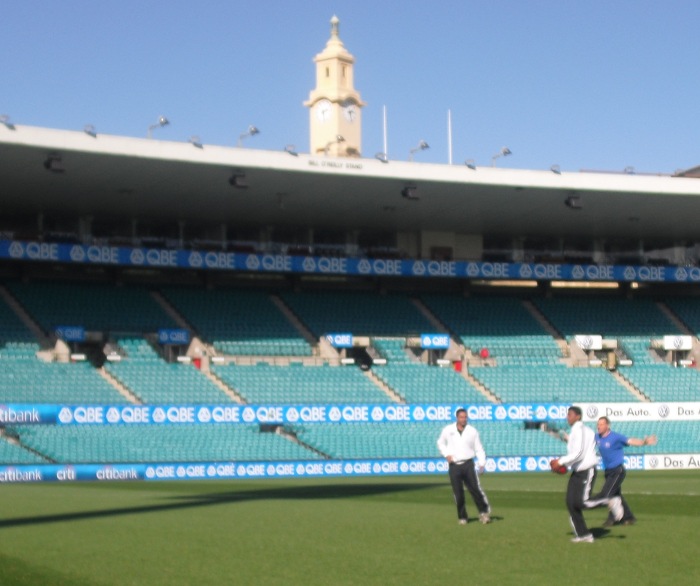