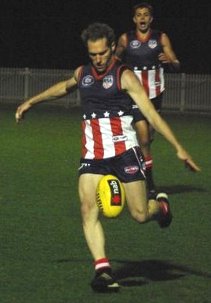 The final session at Blacktown number two oval was expected to see a tight tussle between North American rivals Canada and the United States (seeded just below the Canadians but with a very successful record against them).

And that's exactly what we got, with one of the most enthralling International Cup matches and one of only two for that day that went down to the wire.

What we didn't really expect was the mighty effort from the Peace Team, in particular against Canada in which the Peace Team held the Northwind to just one point at half time.

A spectacular match by two great rivals who have gone head to head in the 49th Parallel Cup many times! Both teams full off big, fast passed and talented players, both teams on top form, hungry for the football and hunting for a win. Canada Northwind and USA Revolution: Two evenly matched teams in an impressive showdown!

In the first half as each team flexed their skills there was some early breakthroughs but the defensive skills of both teams were impressive, quickly closing down the opposition forwards. Though both teams were impressive in marking, but the tightly fought game stayed on the ground in fiercely fought midfield battles. The Revolution managed to snatch a goal away, but was immediately matched by the Northwind. Determined to win, the Revolution got another goal, but again and impressive mark followed by another goal for Victor Cinco, and that was how the teams went into the half time break.

Both teams came out determined and fighting in the second half. The battle for midfield descended into a virtual stalemate, though both teams managed to break to the forward line before being closed down by the opposition’s defense. Eventually the Revolution managed to get a behind and fought successfully against the following Northwind onslaught to retain their one point lead. As the second half progressed, the pace and the intensity of the game only continued, neither side worrying about the next match, just concentrating on the football at hand. USA managed to snatch another behind, holding on to their lead against the desperate Northwind, then with seconds to spare, Cinco got another great mark, well inside the 50, but was unable to convert the chance to clinch the game, the ball slipping wide for a third behind. The siren sounded and the USA came off for a well earned rest, the first game theirs, but only just.

Canada eventually ran out comfortable winners to the tune of 24 points at BISS2 oval this evening.  But the scoreline belies the close nature of the match which was played under lights.

The first half was a battle of Canada’s midfield and forward line versus the Peace Team’s back line.  Looking much bigger, stronger and more skilled than their IC08 unit, the IC11 version spoiled, marked strongly and cleared the ball with long kicking in the first quarter.  Standouts were Almanasra, Abualthom and Suleiman for the Peace Team.  Although unable to score they impressively kept the experienced Canadians to just one point.

But the Canadians who faced playing in Division 2 if they were upset in this match came out much more organised in the second half and kept the ball in their forward line with a strong wall across the half forward line.  Frank Lussier was in everything for Canada setting up scoring shots and giving his team great drive.  Kyle Graham kicked two early goals to put the Canadians out of trouble and Justin Settle sealed the game with his team’s third.

The Peace team were determined to improve this IC and it looks like they have, and Canada will now move on to Division 1 on Monday.

The Peace Team came into the match confident of making an impact after holding Canada to three goals, but the USA Revolution, rested after their own game against Canada, were determined to shut them out. And that they did.

The Revolution came out of the blocks running and immediately kicked a goal. The Peace Team recovered well from that initial shock though and kept up a strong defense. But the Revolutions attack was relentless and they succumbed to the pressure. As the dew settled on the grass, the USA team switched their style of play from upfield kicks to running the ball up, taking advantage to the gaps in the Peace Team midfield, then kicking long into the goal square. And at that they were extremely accurate, with one goal coming from back near the centre circle.

The second half started much the same way as the first, with the Revolution getting a goal straight off the bounce, run all the way to the 50m line by Steve Fashnat before a fantastic finish. The Peace Team started to show signs of tiredness but as the game progressed the Revolution also started to slow down in midfield. To counter this, the whole team pressed forwards, locking the play into the Peace Team’s half. The Peace Team kept up a tight defense, clearing any loose balls and tackling any Revolution player who held onto the ball for too long, but under constant kicks deep into the goal square, the points started to add up for the Revolution. 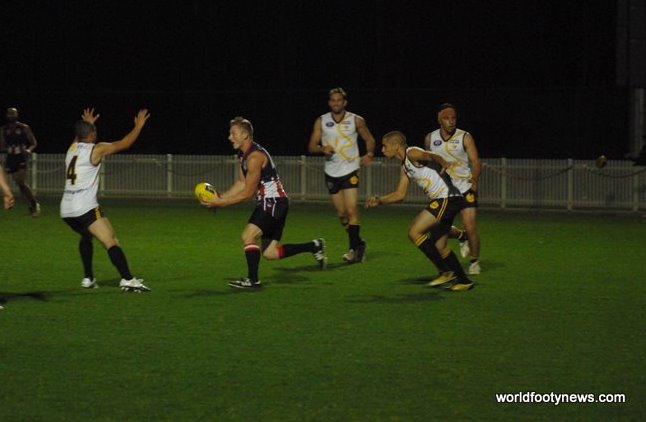 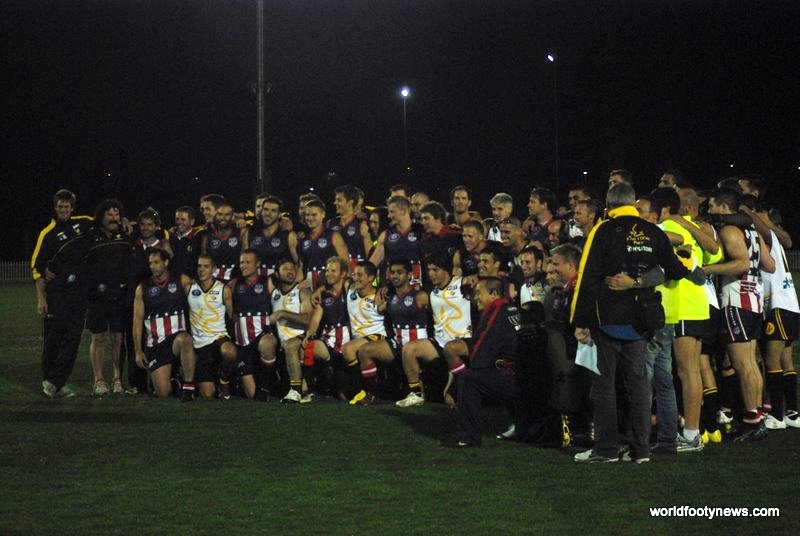