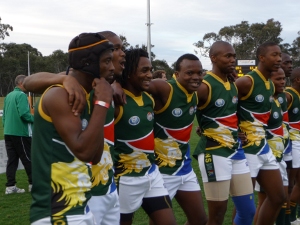 First up the South Africans took on the Danes in what proved to be an intriguing tussle.

Then the Lions faced easier opposition and became the first team to rack up a century victory, against China's Red Demons.

The night at BISS1 concluded with China against the Denmark's Vikings and although there was pillage to be had for the Danes the Chinese did come away with some reward as well.

5pm South Africa vs Denmark - report by Michael Christiansen
Denmark vs South Africa kick off the ‘evening’ session at the main oval at Blacktown.  South Africa probably the bookies favourite but Denmark undoubtedly fired up to show that their 2008 form was not a true reflection.

Denmark got off to the flying start with an early goal to Aksel Jensen on the end of a very clever handball and finishing off beautifully on the run through traffic.  When Mlami in a similar classy fashion to break the duck for the South African Lions, the game was evenly balanced 1.1 (7) to 1.0 (6).  In a fiercely contested first quarter with end to end play, vigorous tackling and chasing and hotly contested ball across the field, the following ten minutes became a frenetic arm wrestle such that Denmark took that 1 point lead into the half time break.  Clearly the best ‘contest’ seen on the main arena so far today with one on one contests and Denmark forcing South Africa to run wide to attempt to open up play.  South Africa have the task ahead of them to overcome the Danes.  The main question mark over Denmark will be their ability to contain the athleticism of the Lions in the second half.

The second half started under intensifying lights as the evening starts to take hold.  Early forward thrusts by first Denmark and then South Africa saw a rushed behind apiece and Denmark retaining their half time advantage.  However, South Africa broke the game open again via athletic ruckman Mlami who again slotted a super classy on the run through traffic.

With the lead in hand, South Africa continued to attack and pressure the Danes.   When the Danish defenders focussed too much on the body and let Gamakhulu pounce on the ball and a classy snap later and the Lions had extended their lead.

With the game slipping away, the Danes started tire and to exhibit some frustration and when one of the Lions stars Khaya Sikiti drilled a long goal the game appeared won.  And so it turned out, with South Africa winning 4.2 (26) to Denmark 1.3 (9) in what was a spirited and entertaining encounter under lights at Blacktown International Sports complex. 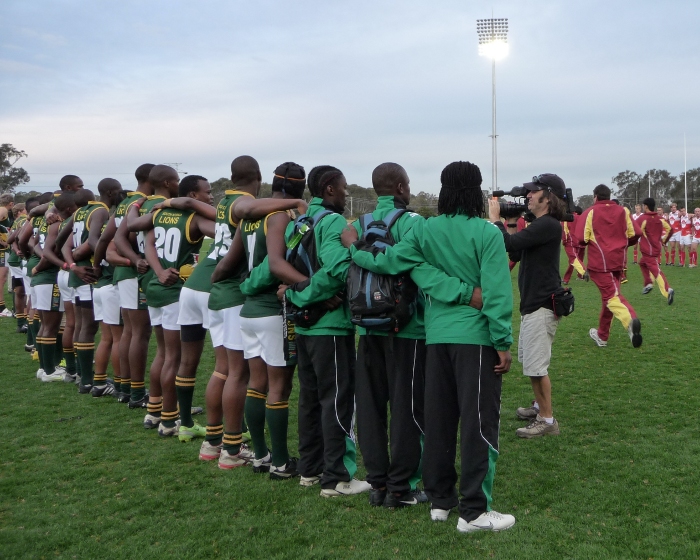 6pm South Africa vs China - report by Michael Christiansen
China got off to a good start when they won the toss and elected to kick to the Eastern Road end.   China managed to ward off the South African juggernaut for 2 minutes before a free kick to captain Sobetwa close to goal and a handball over the top saw Matshane snare the opener from point blank range.   Quickly Madikane followed up after fine delivery from Sikiti and when Matshane slotted his second, the signs were ominous.

And so they were, there followed a further 7 goals, including 3 to captain Bayanda Sobetwa, another to Matshane and singles to Gamakhulu, Markoane and Sikiti slotting one from near the boundary in the shadows of half time and the scoreboard at the same time, which, would read 10.2 (62) to zero at the long break.

The first two minutes of the second half saw more of the game played in China’s half than would’ve been expected.  A lack of luck and a lack of structure up forward saw South Africa finally clear authoritatively and push forward for Sobetwa to snap his fourth.  When dynamic mobile ruckman Mlami drove the Lions deep into attack and the ball landed in the lap of Matshane, he’d drilled his 4th and followed up a minute later with his 5th and the lead had blown out to 80 points.

Pure class from Khaya Sikiti (who has played footy at South Launceston) and a solid goal to Mogapi drew the Lions nearer the ton, and when skipper Sobetwa snapped his fifth the Lions had broken the ton.

When Willem Jonker finally found the right gap between the posts and Mogapi drilled his second on the run from about 30 out in the pocket, the final score was set and when the siren ended the master class the Chinese were staring at a 114 point deficit.  However, it should be noted, the Chinese ruck contested bravely and won a fair share of hit outs.  China though had limited rotations and ran out the game as bravely as possible, still able to muster some nice moves into the forward 50 but lacking the polish or structures to finish off their work.

South Africa 18.6 (114) over a scoreless China.  Sikiti standing out around the ground and Matshane and Sobetwa both on fire up forward with 5 apiece. 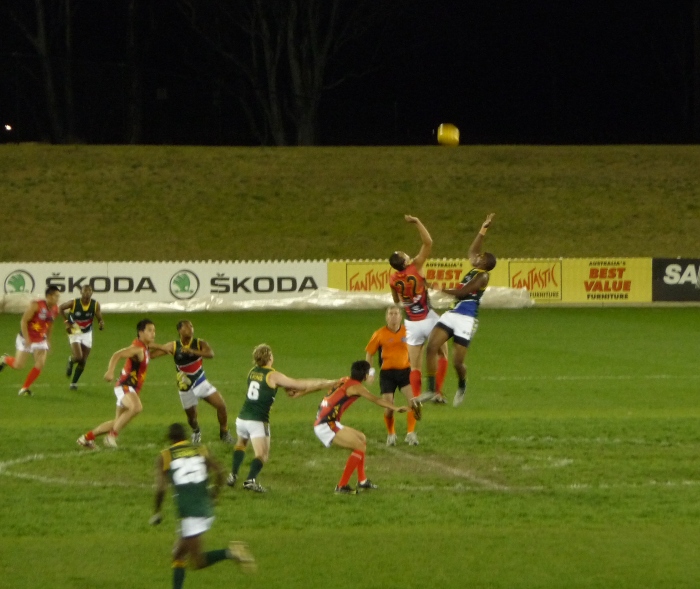 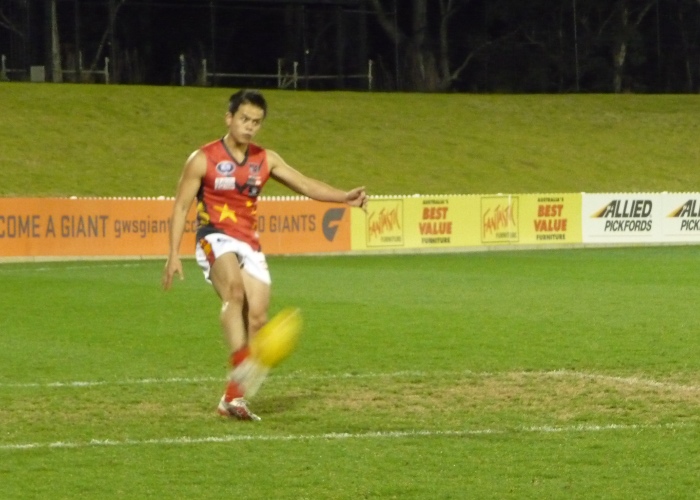 7pm Denmark vs China - report by Brett Northey
One had to feel sorry for the Chinese as they came out in the very cool night air for their second group match, against a Danish side that had pushed South Africa earlier.  Compound their inexperience at football with a bit of a mismatch for body bulk and only one man on the bench, it was hard to imagine a good outcome, but there was a silver lining.
The Danes didn't get it their own way early, with several minutes of footy that was quite an arm wrestle, with the Chinese applying great pressure.  Finally Denmark's Captain Troels Ottesen (#14) opened the scoring.  The audience was impressed by a play in which Viking #18 baulked his opponent, lost his feet stepping inside but still managed to slide past his man.
The Red Demons were at least managing to get the ball to 50m, but didn't look like scoring.  Then suddenly after some congested play at half forward a quick kick went forward, clearing several players, and Zhou Min (#10) ran onto the loose ball, too possession, steadied and from 20m kicked China's first goal of the tournament to great celebration and warm applause.
Unfortunately some of the Chinese players are so new to the game that the basic rules escape them, and a strong mark to Denmark's Ottesen (#14) was followed by a player running across the mark and giving away 25m, resulting in a goal.  At the 1/2 it was 4.4 (28) to 1.0 (6).
It's always good if the captain is also a great player and Ottesen lead the way again, scoring two more quick goals as the Vikings began to run away with the match and China's inexperience saw more frees given away such as loose tackles over the shoulder.  By now their only player on the bench was injured, as were others, so the Demons were doing it tough.
Campion swooped on a loose ball to goal as commentator Rod "Grilla" Grljusich pointed out it was the son of the coach kicking truly.
The Danes' captain poked a poor looking left foot across field but showed his class on the right foot, soon after thumping a goal from long range.
Despite the lopsided result the Chinese were pleased to score a goal and can now look to Division Two and the inclusion of some players in Melbourne who are eligible and should strengthen the side.  Denmark played well in both matches but look a bit far off the pace of the likely top 4, however they should move up the ladder compared with IC08.