2011 Asian Championships about to take off in Thailand 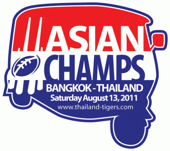 The International Cup is the undisputed pinnacle of worldwide Aussie Rules. But in recent times there have been a number of tournaments scattered across the globe that have fast become prestigious in their own right, capturing an “FA Cup” type aura, and are a much sought after addition to any team’s trophy cabinet.

In North America it’s the U.S Nationals, for Europe the European Championships and Euro Cup, and on August 13th we'll see the thirteenth annual Asian Championships held in Bangkok, Thailand.

While China is fighting out IC2011 in Australia, their Aussie ex-pat dominated sister team will be battling out the Asian Champs alongside ten other mainly ex-pat teams in what is the holy grail of Asian football. The eleven participating clubs include hosts the Thailand Tigers and visitors the Singapore Wombats, Hong Kong Dragons, Indonesia Bintangs, China Reds, Malaysian Warriors, Vietnam Swans, Laos Elephants, Macau Lightning, Cambodia Cobras and Asian Barbarians.

Thanks to Luke Anderson for this report. Luke is currently based in Singapore, but has experience in footy in Canada, and is an assistant coach with the French national team at this year's IC.

The fully AFL-sanctioned tournament is awarded to a new host country each year, last year’s event being held in Shanghai China in conjunction with the World Expo. This instalment, held in Thailand, has been sponsored by “Avion Expat Property Planners” and welcomes his Excellency Mr. James Wise, Australian Ambassador to the Kingdom of Thailand as the Patron of the event.

The somewhat controversial absence of current reigning three-peat champions the Dubai Heat from the 2011 edition of the cup has added a new dimension to proceedings and thrust the favourites tag upon Hong Kong and Singapore, the latter making every cup final bar one. Sitting in the wings are Vietnam, Bali and Jakarta, all quietly confident of an upset as the other likely challengers.

So serious are the preparations for the tournament that rumour has it Jason Akermanis took training in Singapore a little over a month ago to fine tune the Wombats' preparation at a tilt for the team’s fifth cup. While in Malaysia former Hawthorn premiership player Trent Croad has been the jewel in the crown of the Warriors team for season 2011.

The eleven teams will each play four preliminary matches with the top four ranked teams advancing to the semis in a 1st v 4th and 2nd v 3rd showdown. All matches are played in a single day making the tournament a gruelling marathon that puts a great deal of emphasis on good squad numbers and player management.

Host team the Thailand Tigers were eliminated early last year and club sources are expecting another tough tournament with the abundance of talent flying in to this year’s cup. The Tigers are an extremely social and family orientated club, partners and kids are always welcome and catered for and as such the team will be running an Ozkick clinic on the day as well as putting on plenty of food, drinks and entertainment.

The club is always looking for new recruits, players or non-playing, and is a great place to socialize and network. For more information on the host club and the tournament, visit the Tigers website at www.thailand-tigers.com.