IC11 Squad - Can the Revolution wind back the clock? 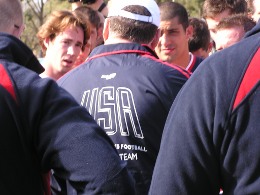 The United States' national squad is headed for Australia determined to break back into the top 4 after slipping out in 2008. The squad features plenty of familiar names from past Revolution campaigns, as well as new talent.

The oldest player is Minnesota's Jason Becker at 43, no doubt a key factor in his longevity being his height at 196 cm (6'5") in a relatively short US squad (by American standards) that has only one other major tall in LA's Bryan Dragus at 198 cm (6'6"). The average height is still a very respectable 183 cm (6 foot).

The average age is a mature 29. The youngest players are 23 year olds Ryan Sutherland, also from Minnesota, and Eric Floyd from Louisville. That's a sign of the Americans' major strength and weakness - it generally serves up a tough, physical brand of footy with mature bodies, but a widespread junior program still eludes them which means there aren't the numbers of exciting youth coming through that we see amongst their rivals in the top echelons of international footy. As such expect a very honest effort but the pace might be too hot at the pointy end.