US Revolution Head Coach, Matt Bishop, is excited and nervous about the big year ahead, with his team heading to the International Cup in Sydney and Melbourne in August. "The anticipation and anxiety levels have certainly shot up since the clock ticked into 2011. While there are many projects to be completed before the International Cup part of me wishes it was here already!"

First on the agenda for the team is a training camp in Austin Texas at the end of February. "The Revolution training squad has been reduced to 37 players and our main goal over the next six weeks is to reduce this to the 28 that will be travelling to Australia in August. Once we have selected the squad we will be monitoring the progress of the players through testing very similar to that used at the AFL Draft Combines. I believe that, in the future, the AFL will utilize the testing protocols they have developed to screen potential international talent and they have already given that indication with World XVIII applicants required to complete aspects of the testing. 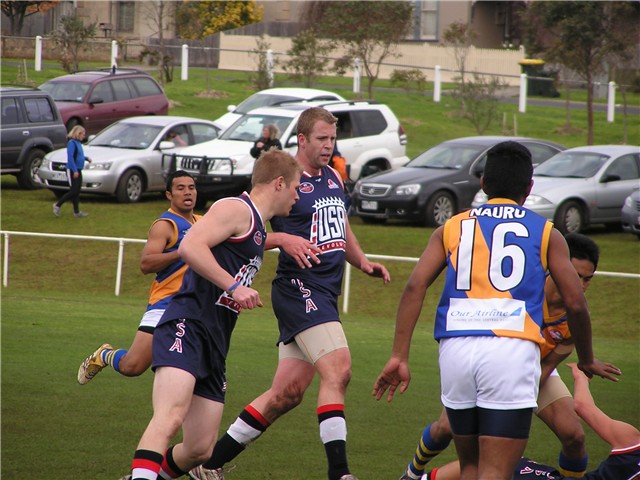 USA vs Nauru at the 2008 International Cup

"Another major focus for the months leading up to the International Cup will be raising funds to assist the selected players and ensure they are able to make the journey that is not only demanding on player's time and energy, but also financially," says Bishop.

The Camp will be the last opportunity for players to try to make the 28 man squad, with the final squad being named on March 6. It is also the last opportunity for the players to be together as a team before heading to Australia. According to Bishop, "We will review and test player fitness and skills with the goal of identifying strengths and weakness and subsequently develop a plan to help the player's to continue their development. We will also continue to develop the game plan that will be implemented at the International Cup."

A major difference between 2011 and previous International Cup campaigns is that the Revos are not going alone. For the first time the Revos will be joined by the US Freedom coached by Leigh Barnes. "I am certainly excited about the opportunity to have Leigh and the Freedom in Austin with us. One thing I noticed while watching the Revolution play in the 2008 International Cup was the lack of supporters. No doubt it is not easy for player's partners to travel with the team, even though I fully condone it. Having the Freedom tour with us in Australia will be a huge bonus and provide an instant support group that we can also reciprocate. There will only be a handful of teams that will have a touring party as large as we will so this will definitely be an advantage to the U.S. teams!"