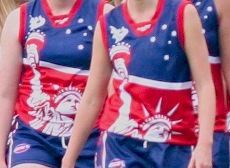 The USAFL today announced on http://www.usafl.com that Leigh Barnes, former Executive Board Member and long time USAFL player, umpire, coach and administrator as the new national women's team coach who will be the coach of the Freedom for the women's division of the 2011 Internantional Cup in Australia.

The statement reads as follows “We are extremely pleased to have Barnesy on-board as the Freedom’s Head Coach, he brings with him many years of playing and coaching experience and a good nature that will enable him to bond well from day one with the team”, says Rich Mann, USAFL President.

Leigh is originally from Launceston, Tasmania, however also lived, played and coached football in Brisbane for 15 years. He is now living in the east San Francisco Bay area with his son Kai and works as a Materials and Research Engineer.

Leigh is the founding President of the Golden Gate Australian Football League, 2005 Division II champions, and has played over 400 games of football in his lifetime. He represented Tasmania three times, Queensland once, and kicked over a hundred goals in a season twice during his career.

The entire USAFL community would also like to extend our gratitude toward the previous coach of the Freedom, Wayne Kraska, who has overseen the development of women's football in the USA for many years now and at the 2010 National Tournament received a well deserved USAFL Life Membership.