Well known Jakarta Bintang, Craig Senger tragically lost his life in the recent bombing of the Hotel Marriott in Jakarta. All football followers in Asia have been greatly saddened by this news, and condolences have flowed to the Bintangs, his wife and family.

To help celebrate Craig's life, the Vietnam Swans will play a memorial match against the Lao Elephants on Saturday 8th August in Hanoi honouring Craig and other victims of the Jakarta Bombings.

To recognise the positive impact Craig had in his life on others, his wife Kate has set up the Craig Senger Indonesia Memorial Fund with the assistance of Westpac Bank.

The Fund has been established to receive donations from the public in commemoration of Craig's life. The fund will support one or more charities in Indonesia, depending on the amount of contributions received. It also provides a means by which grieving friends, colleagues and members of the public can make donations, in lieu of flowers, at the funeral and the memorial service.

Craig was an Austrade employee in Jakarta, and Austrade have generously given support to the Craig Senger Indonesia Memorial Fund by holding a raffle in conjunction with the Vietnam Swans vs. Lao Elephant's memorial match in Hanoi on Saturday;


Tickets are 100,000 VND each and will be drawn at the Vietnam Swan's After Match Party at Jafa's in Hanoi at 6pm on Saturday 8th August with all proceeds going to the Craig Senger Indonesia Memorial Fund. Winners who cannot attend will be notified the following week by details provided on ticket.

Please contact Shannon.Leahy@austrade.gov.au if you have other prizes you wish to donate or if you would like to buy some tickets in support of the fund.

In HCMC, tickets can be bought at Austrade, 5th Floor, 5B Ton Duc Thang St, D1 and will also be sold at AusCham’s coming Tim Harcourt luncheon on Thursday 6th August.

It behoves all footy supporters in Vietnam to get to the game and remember and celebrate the life and tragic passing of a guy who gave his all on the footy field and in his life. 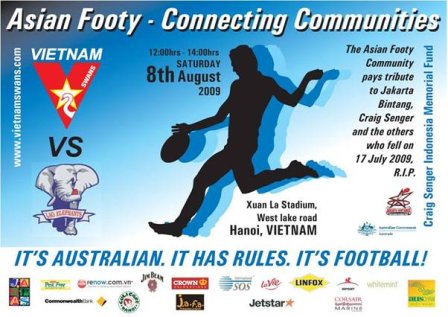