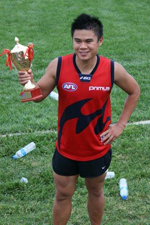 The Beijing Bombers this year kicked off their first ever Metro League season, culminating on the weekend of July 18th with the DongCheng Demons finishing top of the table and taking the 2009 title.

The Beijing AFL's spring season saw teams - Dongcheng, the AZ Chaoyang Cats and the Santa Fe Saints - playing each other twice over three rounds, each side having one host round where they played both rival teams.

Over forty footballers pulled on the boots over the course of the three rounds, including around a dozen local Chinese players. Following the successful first-up season, an autumn league will be held as well this year, with matches on August 15, September 19 and October 10.

A full review of the whole season is available from the Beijing Bombers' website.