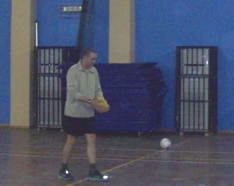 Many countries have military forces in Afghanistan as part of the ongoing conflict, under the banner of the International Security Assistance Force.

Australian Sergeant Darrin Tapp is a Physical Training Instructor (PTI) in the Royal Australian Air Force in Afghanistan. "One of my roles here is to keep up morale and fitness levels for the 2000+ troops from 40 different nations around the world. One of these ways, and to bring a bit of Australian culture to HQ ISAF is to allow several nations to experience our great game of Australian Rules Football".

So Sergeant Tapp undertook the process of getting a tournament going in Kabul, Afghanistan's capital, with the aim of linking it in with ANZAC Day, including inviting players to a service and to watch a telecast of the Collingwood versus Essendon clash from the MCG.

Tapp has contacted the AFL seeking assistance, and also turned to other countries with forces in Kabul. Who better to assist in that process, than US Captain David Payne. Regular readers may recall his efforts to start up an Aussie Rules club, the Mojave Greens, at Fort Irwin in California. Payne is now serving his country in Afghanistan and has been working with Tapp and others to ensure several Aussie Rules teams are assembled.

Training began with an indoor sesion (pictured). So far, the American and British teams are fully fielded. The likely configuration is that the Brits will have two sides and the US one side, so the intention is to then select the best players to take on a combined team of Aussies and Kiwis. Captain Payne will coach the combined US and British team. The actual dates of the matches have not been finalised, and the job of pulling it all together is not yet complete. Payne has been a key contributor and was typically upbeat, saying "The good part about this is that North Melbourne and West Coast stepped up and are sending us footies, jumpers, and some other incidentals". The Collingwood Football Club is also supplying memorabilia and other incidentals.

It's probably too much to hope that the Kabul Cup will seed Australian Football in Afghanistan, but perhaps the players exposed to the game will return home with a new interest in Australia's "indigenous" sport.