Anzac Day and Australian Football are inextricably linked , more so than any other of the football codes played in Australia. The immortal words “Up there Cazaly” were used to inspire diggers in the trenches in World War 1. The story of one of the game’s great icons, Ron Barassi begins with his father, himself a Melbourne player being killed in World War II and the young Ron being fostered by the legendary Norm Smith.

Another Melbourne player, “Bluey” Truscott, was an ace wartime pilot, twice awarded the DFC, and unfortunately killed in action. Melbourne’s best and fairest award is named after him. Hence it comes as no surprise that games on Anzac Day assume a special significance, the one certainty being that coaches in pre-match addresses will pepper their orations with ‘courage’ and ‘sacrifice’, and unnecessarily remind the boys to ‘remember what day this is'.

South East Asia, which has seen more than its fair share of Australian military action, sacrifice and courage over the years is no exception, and this years Anzac Day sees major ceremonies and football events in Malaysia, Thailand and Indonesia. Of particular interest the Malaysian Warriors are hosting the Singapore Wombats (a Changi Cup Clash) and an Australian Army team at Alice Smith School starting on Saturday at 1pm, playing for the Anzac Day Cup.

Pre-match publicity has included an appearance of Club President Glen Sargeant, Coach Scott McDonough and Event Co-Ordinator Adam Carlon on the ntv7 Breakfast show to promote the game and explain to the somewhat bemused Malaysian audience what our great game is all about. The boys were able to promote not only the Anzac Day carnival, but also Auskick (which has taken off very nicely in Malaysia and is now being introduced into local schools), as well as the Asian Championships to be held in KL in September. Super publicity and brilliantly done, guys!

The event is co-hosted with the Australian Alumni, the members of which comprise students who studied in Australia, and is combined with their annual Hunteroos Race, a kind of motor rally-treasure hunt which will conclude at Alice Smith School in time for the football. The alumni event is fully catered (including Australian wines and beers), with separate tents set up with tables, a buffet, lamb spit etc. . The Australian Deputy High Commissioner, Mr Craig Chittick will be attending the event, and will toss the coin at the start of the tournament. The Australian Army will be officially represented by Lt.Col Mick Birtles.

Australia Network is also arranging for a number of journalists to attend the ANZAC Day carnival. They will be promoting "where you can get the best of Australia, right here in Malaysia".
So it should be a teriffic atmosphere, and as to the footy, very interesting.Singapore-Malaysia clashes are always hotly contested, and even though Singapore have dominated over the years, under new coach Andrew Taylor, they will find the Warriors very competitive at home. The Army boys are a wild card though one could suspect they may be a bit weary having attended the dawn service prior to coming to the ground, and possibly the heat may find them out later in the day.

A full report will be provided on WFN next week, but if you are in KL get down to the ground on Saturday afternoon – Alice Smith School, Sri Kembangan, 1pm. 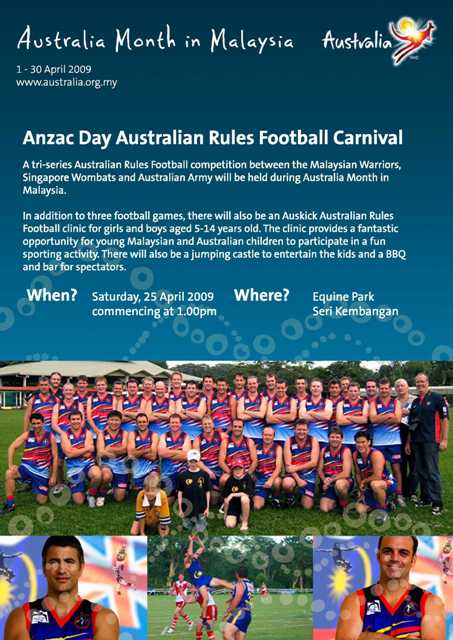