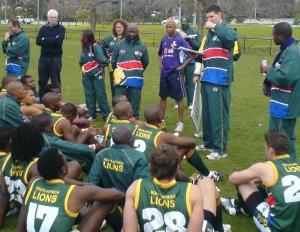 Although AFL South Africa lost its marquee event for 2009, the NAB Cup match between Collingwood and West Coast in Cape Town (now moved to Subiaco due to sponsor issues blamed on the global financial crisis), there's still a very busy schedule of exciting events planned.

worldfootynews.com spoke with Operations Manager Anthony "Joel" Kelly, Lions captain Mtutu Hlomela and North West Provincial Development Manager July Machethe, about what will be yet another exciting year for the game in this footy hotspot, which includes tours by the Australian Institute of Sport (AIS) and Geelong College, as well as a development camp by Fremantle and the launch of further programs focussed on footy, health, education and employment.

Kelly gave a quick run down on what is planned for the year:

Many of the AIS youth team will go on to be drafted into the AFL, so once again they will be a huge challenge for the home team, but with rapid improvement in the side it will be interesting to see how the Lions perform against Australia's best young players.

The question is whether South Africa will field a senior side, a youth side, or a mixture, as they did last time. Captain Mtutu Hlomela answers, "The AIS Team that is to tour SA will be a full AIS Team and they'll play against an Open Lions team. It will most likely be the International Cup side, coached by Jason McCartney again. We have not decided on the mix of players as yet. We'll definitely have the young players from the International Cup in the side".

Given their excellent third placing at IC08 the Lions will be looking for a very competitive performance.