Chinese break through in tight battle with Indians 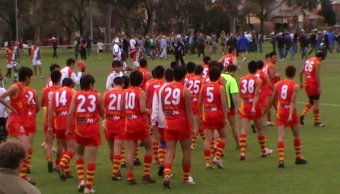 As two of the freshest teams at the International Cup, India's Tigers and China's Red Demons both faced a huge learning curve on the field. When they faced off at Royal Park on Friday, it was a strong contest between two sides who had improved immensely over the past two weeks.

Some inaccuracy in front of goal by the Chinese saw the Indians with a two-point break at quarter time, but from then on the Red Demons got their noses in front and kept a slight advantage over the Tigers for the remainder of the game, eventually finishing with a jubilant 14-point win, their first-ever in International Footy.

The first few minutes saw a tight tussle in the Chinese forward line, with a rushed behind but neither side able to get the upper hand. The first goal of the match came to Yan Feng, who marked for China deep in the pocket, then converted on a tight angle.

At the other end, the Indians launched an attack through Vishnu Rishie, who launched a kick on the run from 40m which bounced through for a goal.

China's Ning Jin attempted a spectacular scissor-kick shot at goal from mid-air, but only went through for a point. The final goal of the quarter went to Rakesh Ghosh, who took a great mark moving back with the flight of the ball, then kicked truly from dead in front. Quarter time: India 2.1 (13) to China 1.5 (11).

The second quarter saw the Indians start well, with strong marks to Vasanth Subramaniam and Ayush Gupta up forward, but neither able to score. Mayank Shah marked and took a shot at goal which fell short, but Mario Shelton received a free in the pack and had another chance to put the Indians' first goal on the board. However, it too was only a minor score.

From here, the Chinese strung four impressive running goals together. Wang Lei roved the ball, broke a tackle and goaled on the run. Ning Jin gathered the ball and goaled from just inside the arc. Yan Feng roved the pack and grubbed through another goal. Xu Jian received a handpass from the pack then goaled from in close.

The Tigers were looking like remaining goalless for the half, before Subramaniam marked and this time kicked truly for a goal after the siren. China 5.6 (36) to India 3.4 (22).

The Indian huddle at half time was showing the tension of the match, with players starting to look tired after such a long tournament. The atmosphere among the Chinese on the other hand was electric, with the Red Demons starting to feel confident they could come away with their first win.

The third quarter was very tight, with each side only managing one major, including a great snap to India's Mervyn Nathaniel. Both sides wanted the ball, with China coach Darryl Hoffmann rating it the best quarter he'd seen them play. At the last change, it was China leading 6.9 (45) to India 4.5 (29).

The start of the last term saw Wang Lei mark very close to goal, then kick straight into the post. This was to be emblematic of China's quarter, having plenty of the ball, but kicking 1.5 for the term. China's only goal for the quarter came through a free kick for a high tackle, which was paid down field. India managed two majors through Kaliasanthan, actually outscoring the Red Demons in the final term, but it wasn't enough to get them over the line, China finishing winners 7.14 (56) to 6.6 (42) over India.

The jubilation in the Chinese camp was as if they'd won a premiership, with the squad converging on coach Hoffmann and throwing him into the air. The Indian camp looked fairly dejected, becoming the only team to leave the Cup without a win, but plenty of positives in their improvement over the tournament.

The Indians named two MVPs for the tournament, hard-working soccer convert Mervyn Nathaniel the best of the boys who had come from Kolkata and Vishnu Rishie the best of the Melbourne-based players. Brian Dixon again spoke to the Indians, reminding them that South Africa performed similarly at the 2002 IC, but have since gone on to become a force to be reckoned with. If that kind of attention from Australia can be focussed on China and India, then who knows how strong the teams we see from Asia could be in future.

Ed. (Brett) Perhaps the Indian potential can be summed up by one play. They had possession with a kick-out into the back pocket. The player had 30m of space, and tried to run the ball out. Then came the need to bounce it. His attempt was tentative and didn't come back to him. The 30m became 5m as he tried to regain the ball and a Chinese players raced towards him head on. Just in time grasped the ball, regained his posture and prepared to kick. The approaching opponent jumped in the air to smother it, only to have the Indian player not actually kick, but baulk around his opponent who was now airborne and run on up the field. The Indian had produced a poor skill error and a piece of beautiful instinctive play all in the one passage.

Red Demons in one of the changing areas. 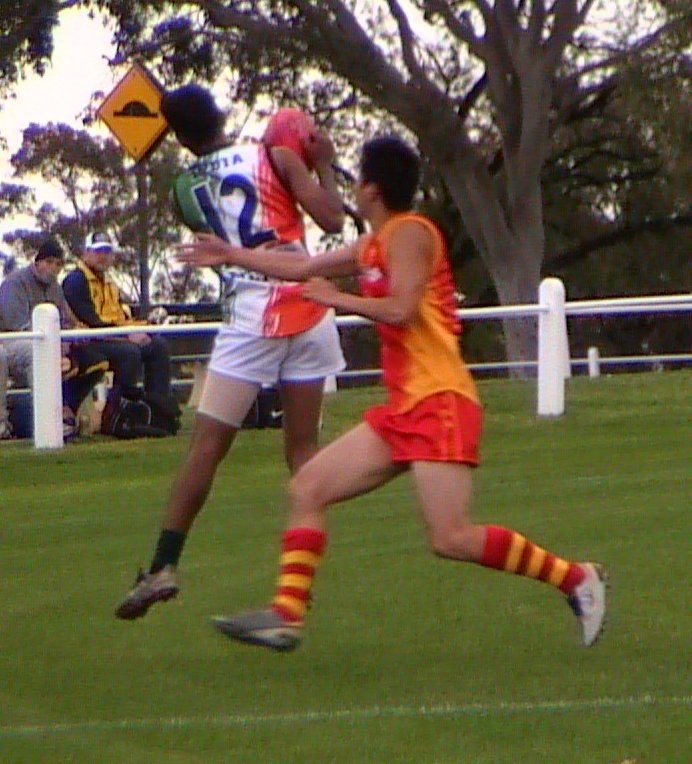 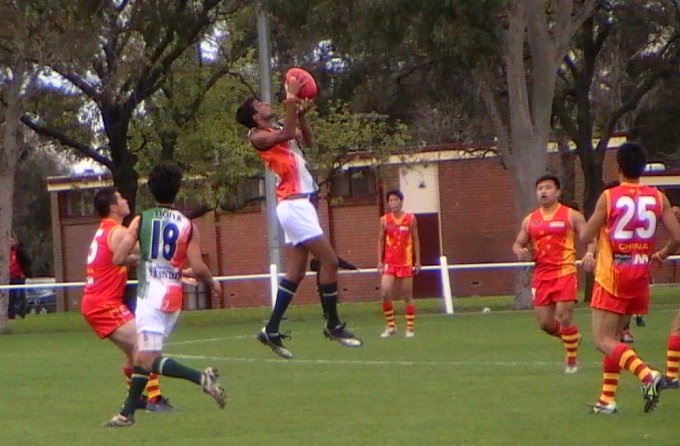 Aerially both teams grew in confidence during the tournament.

Stacks on as the Chinese players celebrate their win.