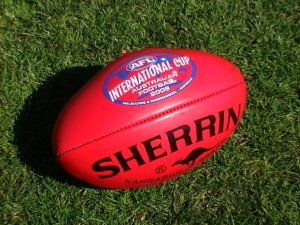 The 2008 Australian Football International Cup draws to a close on Friday 5th September with 7 games (and a Multicultural Challenge match) at Royal Park in Melbourne and then what should be a terrific battle at the MCG from 5:10pm between New Zealand and Papua New Guinea as a curtain-raiser to the Hawks versus Bulldogs AFL final.

The Warrnambool first round finals matches went mostly as predicted and have set the scene for 8 very tight battles. First up in the 10am slot at Royal Park's Western Oval is Finland versus the Peace Team. Both had their first wins in Warrnambool and will play off for 13th and 14th positions. The Finns should be too accomplished, assuming they can find enough fit men given their squad is down to its last numbers. The Peace Team will attack them with renewed enthusiasm and do pose a serious threat. Finland by 12 points.

Also at 10am, at McAlister, is the 9th and 10th contest. If you want to see tough, uncompromising footy, Great Britain and Samoa will oblige. The Brits failed to stand up to that style against Nauru, but the Samoans don't quite have the same skills as the previous Pacific islanders, and with captain Fia Too-too missing may fall just short. Great Britain by 17 points.

The final early match is Nauru and Canada at 10:15am on Ransford Oval, fighting for very respectable 5th and 6th finishes. The Canadians have looked good all tournament, and Nauru have surprised several opponents. If the Norwthind can use the ball well enough to give good service to their forwards then they should kick a score that the Nauruans can't match. But perhaps the midfield pressure will be too much. A tough call, but Nauru by 4 points.

Western hosts the 11th and 12th play-off from 11:45am with old rivals Sweden and Denmark locking horns, in this case the horns of an Elk against those of a Viking helmet. These teams have played enough games against each other in Europe (although often neither at full strength) to know that the Danes should be too good. But after a bruising battle with Samoa the Elks may have learnt a thing or two about standing up under pressure, and if they take it at the Danes they might just find a chink in the Vikings' armour. But assuming not, and the Swedes lacking numbers, Denmark by 24 points.

A hurting US team, sliding down the ladder to play off for 7th and 8th at 11:45am on McAlister Oval, should be able to restore some American pride against Japan who have been up and down, excelling against the likes of Samoa yet crumbling against Canada. It may be time for the US to exorcise some demons. US by 30 points.

At 12pm on Ransford we have the big clash for 3rd and 4th spots, re-scheduled to allow spectators to get from this match to the MCG in time for the Grand Final (which is a ticketed event being an AFL match curtain-raiser). A big difficulty with the 3rd/4th playoff matches is evaluating the mental state of the combatants. Both will have thought they had a shot at the MCG final so it is difficult to re-adjust the expectations. In 2005 the US were on the rise and looking for more scalps, and duly took Ireland's with ease as the Warriors played dis-interested footy in the corresponding match. A similar attitude this time and they will be beaten by South Africa, but play like they did against New Zealand and they should win. A very tough call, the Lions will be too fast around the ball but the Irish will win in the ruck and key positions. Based on 2005 and the knowledge that the Africans always get up the enthusiasm for a match, South Africa by 5 points. I just know I'm setting myself up for stirring by the Irish.

1:30pm on McAlister has the Multicultural Challenge match between Team Africa and Tonga. This will be the first chance to see Tonga in Australia. They missed playing in the main International Cup tournament, unable to commit enough players for the full duration. It's great to see them make the trip, no doubt strengthened by local Tongans playing in Melbourne. Outside the main draw and not knowing what players Tonga have available we won't offer a tip on this one, but Team Africa have three matches under their belts already, which should help.

At 1:45pm Ransford hosts India and China. Over a third of the world's population is represented by these two teams, we can only dream of how important a match like this might be one day. For now it's to decide 15th and 16th and is the last chance for either side to register a win - one side will most likely depart the Cup very disappointed. The Indians showed promise against a tiring Finland, while China pushed the Peace Team. Given the Finns are probably better at this stage than the Peace Team, perhaps India should be favoured. But the Chinese have a better mix of sizes, and if they can exploit that they might pinch a win. That's a big if, as the lower sides have struggled to put the ball up in the air accurately for their bigger players. Another tough match to predict, China by 1 point.

We'll save our thoughts on the main event between New Zealand and PNG at the MCG for a separate article. Tonight the teams gather at the Crown Palladium for the Official Dinner.