Manila Cup set for May 31st

The Philippine Australian Football League plays host to teams from across Asia on May 31st. The Manila Cup lists the Philippine Eagles, Hong Kong Dragons, China Reds, Malaysian Warriors and the Hongila Dogs. Sponsored by companies such as Leighton, Metals Exploration and ANZ, the tournament will be a major milestone for the PAFL, which first formed in 2004 (see Aussie Rules gets its start in the Philippines).

The Chinese side, the Reds (not Tigers as listed on the poster), are the merged forces of the Shanghai Tigers and Beijing Bombers (probably mostly the expatriate Aussies). The Hongila Dogs will be a combined side of extra players from the larger Philippine Eagles and Hong Kong Dragons squads. PAFL organisers had been hopeful of the Dubai Dingoes making the trip, but it didn't turn out so the Hongila side slots in.

Meanwhile the PAFL's weekly games continue between the Eurekas (originally based on expat Victorians) and the Dingoes (based on "the rest").

Read on to check out the tournament poster for the 12-a-side Manila Cup. 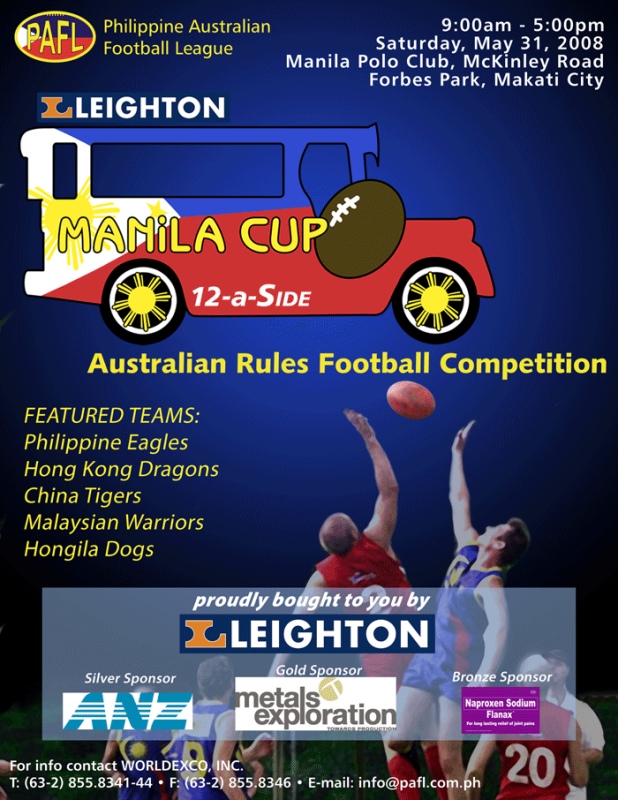