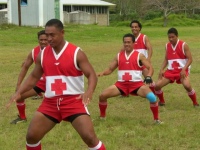 In the past year or so the Tongan Australian Football Association's Michael Russell has been steadily taking over the reigns for footy in Tonga from TAFA's founder, Mark Korsten. TAFA had Russell in Tonga as an Australian Youth Ambassador for Development (AYAD), and although a new AYAD, Dylan Harper, has recently arrived to continue the work, Russell has remained involved and is overseeing the small nation's push to attend their first Australian Football International Cup. But the Pacific country still needs some extra support to get them over the line.

Russell is enthusiastic about the number of people getting involved both in Australia and Tonga, but remains unsure whether the country will be able to make the final commitment. "All I can say is that we have done a heap of work and slowly things are looking more viable".

In particular TAFA are hoping to find a major sponsor to offset flight costs, with a figure around AUD$20k being pursued. "We have put together a package and feel that we can offer plenty to a potential sponsor, both in terms of PR goodwill and more tangible benefits capable of generating a return on investment". Any businesses interested in learning more can contact TAFA through their website.

One suggestion that has also been kicked around is the idea of a combined islands team, such as Nauru-Tonga, if either of those small countries are unable to gather enough players or afford to send them. Such a combination would not be inconsistent with the tournament, given an Israel-Palestine team is on the cards and separate Spanish and Catalan teams are being considered. Keeping the developmental division two flexible would maximise the number of nations represented.

You can read about the excellent credentials of young West Australian AYAD Dylan Harper on the TAFA website.