The football ovals are around two to three kilometres from the Melbourne CBD (depending on which part of the city you're in), and can easily be reached by tram. They're less than 1000 metres northwest of MC Labour Park (formerly Princess Park, Optus Oval), where some matches were played in the second International Cup. An advantage of the location is four full sized fields adjacent to each other, meaning spectators and players alike can see multiple matches close together.

After the first Cup in 2002, Will McKenzie was keen to see Royal Park North used in 2005, and it's fair to say he shared the disappointment of some spectators and attending nations at the slightly smaller ovals at Port Melbourne's Murphy Reserve in 2005, which seemed to lead to crowded play (we've been told their dimensions were 135m x 84m and 140m x 94m, compared with at least 160m by 100m at Royal Park North).

worldfootynews.com has wondered about the suitability of Royal Park North, but McKenzie contacted us to explain, "My written follow up to the 2002 Cup recommended that parks with at least two adjacent ovals be used for the 2005 International Cup to create atmosphere and camaraderie on match days, with Royal Park North being perhaps the best available, and am delighted to see it being used in 2008. If you remember in 2002 we used single ovals and it was a solitary experience being at matches".

WFN hopes the AFL ensure a good viewing platform between the main ovals. Given that the USAFL typically arrange that for their annual Nationals, one would expect the same for the International Cup. "Royal Park North has three full sized ovals adjacent to each other, with a fourth very close (see image attached). The facilities are excellent, and whilst there is no grandstand there is good viewing of the ovals and there is scope to build a viewing platform between the ovals where the drive splits in two".

Still, one has to wonder if the fields will give the professional feel of enclosed ovals typically used at state league level. And given the matches will be on week-days when many fans will be at work, it would be highly desirable to see at least one of the top ranked matches played under lights, presumably something that could be arranged at MC Labour Park. With this the pinnacle of international Australian Football until 2012, making these small extra improvements is surely warranted. 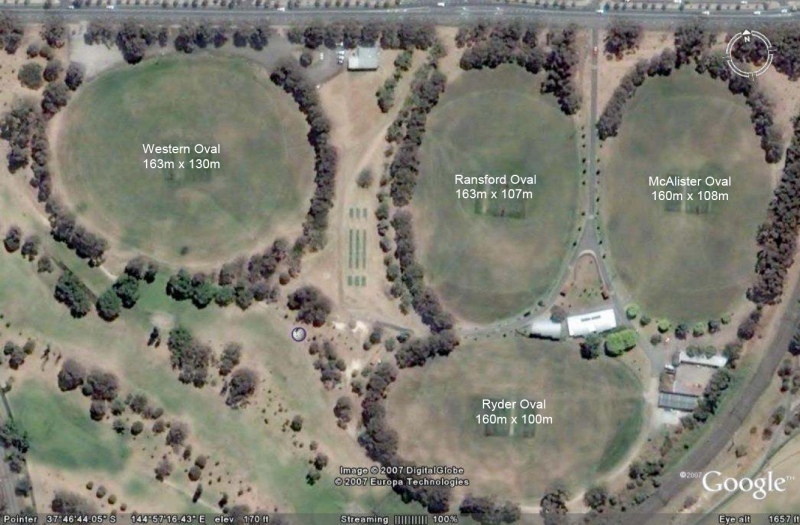