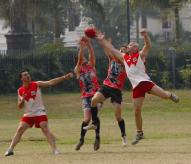 12.30pm saw a piece of history begin. In stinking hot conditions the ball was bounced in a 16-a-side match of 2 x 20 minute halves that would mark the beginning of a soon-to-be-awesome history. The Elephants came out flying with O'Brien steaming away from the first centre bounce following Barker's precision tap down. The Elephants were two goals up in no time through sausage rolls from captain Sharples and Paddy O'Shay. At this stage it was a case of how far the Elephants? How easy is International Footy?

Then our nemesis fitness kicked in and captain Hassett's hamstring snapped in half. All of a sudden the Swannies were able to kick a couple of cheeky ones either side of half time and hit the front. The dam builder Ben Smith was moved onto the ball and a wall of Irishman were told to run like Michael Flattley dances in an effort to bring the Phants back. While the Elephants had a lot of the ball they were unable to convert opportunities despite Phil Jordan running amok down at full forward. A late goal from Seamus Declan O'Malley was unable to pull the Elephants back as they went down in their first ever game by 9 points. A gallant effort by the lads but ultimately we were left to rue missed opportunities. 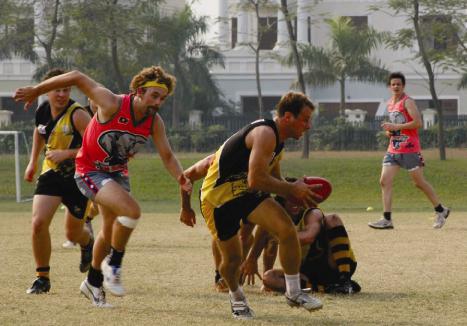 By this stage it was about 45 degrees celcius and the general consensus was that we didnt really want to play another game of footy straight away against the fresh legged and very experienced Tigers. But an elephant never gives up, and from word go the 'Phants gave a solid contest even kicking the first goal through the steamrolling Peter O'Brien. However, the Tigers dominant midfield then began to run amok feeding Tigers skipper Rhino at every opportunity as he slammed through goal after goal. At half time the Tigers were 6 goals up.

The second half was the highlight of the day for the Elephants as the backline which had been under constant attack in the first half was able to stand up to the Tigers powerful forward line, and convincingly outplay them. Sunny Forsyth, with the best sideburns in international footy laid some crunching tackles, and big Seppo Chris started running at people with the look that he really, truly wanted them to be in pain very shortly. Kempy thwarted many a tiger attack at half back and the G-train started to threaten opponents with all sorts of nasty post-game shenanigans. With more grunt down back and a steamrolling on-ball unit the Elephants looked like a very solid side and slammed through goals from Bertie O'Driscoll, the big bad Rooster, and Sharples to ourscore, and outplay the tigers in the second half.

The Lao Elephants will be lining up for their next match in the near future, and are aiming for the 2008 Asian Championships, to be held in Singapore next August.