Osaka make the GF in first year of JAFL Top League, but go down to Goannas

This report courtesy of afl.com.au and Hideki Miyasaka from Japan AFL.

The Tokyo Goannas and the Osaka Dingos played off in the 2007 Japan AFL Grand Final and it turned out to be one of the games of the year. It was a tremendous achievement by the Osaka team to make the GF in their first year in the Japan Top League.

The second quarter continued on from the first with early goals to the Goannas and strong performances from Huddleston, Rice and Flanagan in the backline. However the Dingos again showed conviction to fight back with goals to Currie, Thompson, and Freijah, and it was an even three goal apiece quarter.

The start of the third quarter was exhilarating and the Dingos threatened early with 2 early goals to close the gap to less than 15 points. However, the Goannas clicked in to gear led strongly through the middle by McGrath, Rowe, Huberts, Thursfield and Wilson. Phillips in the backline played strong attacking football and the ball was driven forward in thrusts. Quick ball movement by the Goannas and excellent use of handball again saw Mitchell cap off the good work with 3 goals for the quarter. The premiership quarter was dominated by the Goannas who broke out to a 48 point lead at the last change, with the game almost decided. 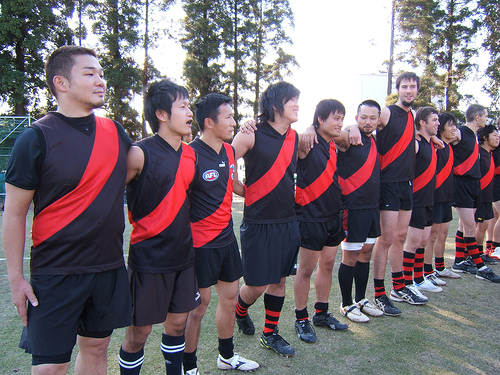 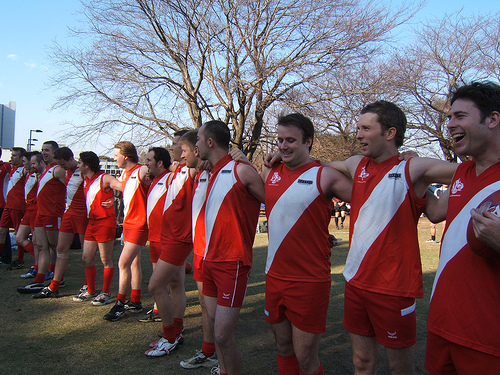 The Goannas team took the foot off the pedal in the last and all players contributed in an even, attacking and damaging grand final performance. The Dingos finished the game with Currie starring up forward to finish with 6 goals. However it was the Goannas who hung on to take out the Champions Trophy for the second consecutive year to win by an impressive 24 points, 15.18 – 108 to 12.12 - 84.

In addition to the Japan AFL season just finished, the Nippon AFL kicked off on October 26th, with teams from Osaka, Kyoto, Kobe and Nagoya competing in their 2007-08 season.